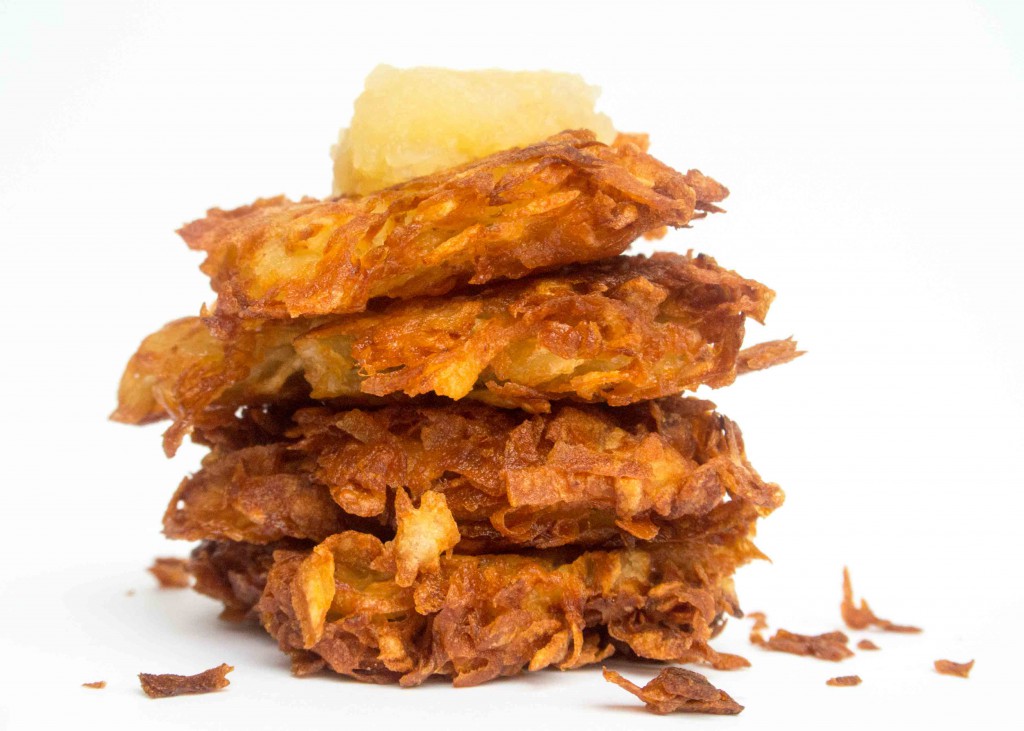 And potatoes are at their finest when fried. I like the mushy and medium fries best though, not the little crunchy pieces. I mean, I will finish any fries that even slow down in front of me, but I prefer fries to have a little variance in texture. 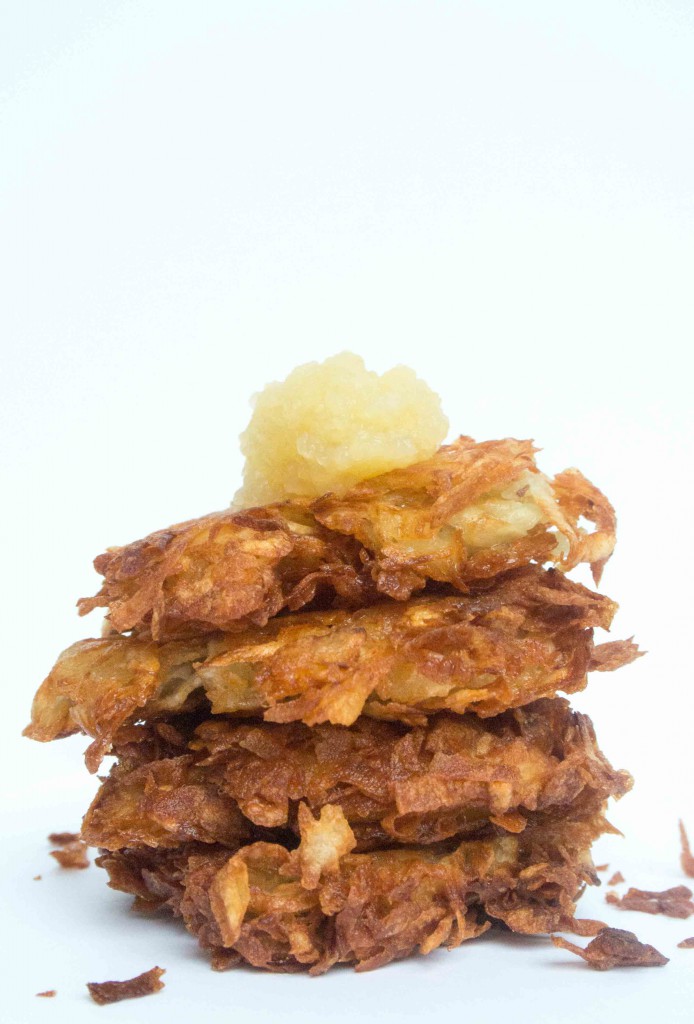 Latkes are a Jewish food; among its best I may add. People refer to this fried potato cake by a few different names – Latkes, Potato Latkes, Potato Pancakes.  There are actually additional latke camps for which you have to declare loyalty: ingredients and form, toppings, and grating size.

For ingredients, although all recipes include grated potatoes mixed with egg, fried into a pancake, some recipes add grated onion, and a binder like matzo meal, but my family is straight potato-and-egg. No newfangled zucchini latkes around here. Included in the form debate is how thick you like them. Because my dad’s all come out a slightly different size and thickness, we all could have exactly the type we like. Like my french fries, I like a crunch on the outside and a softer middle. 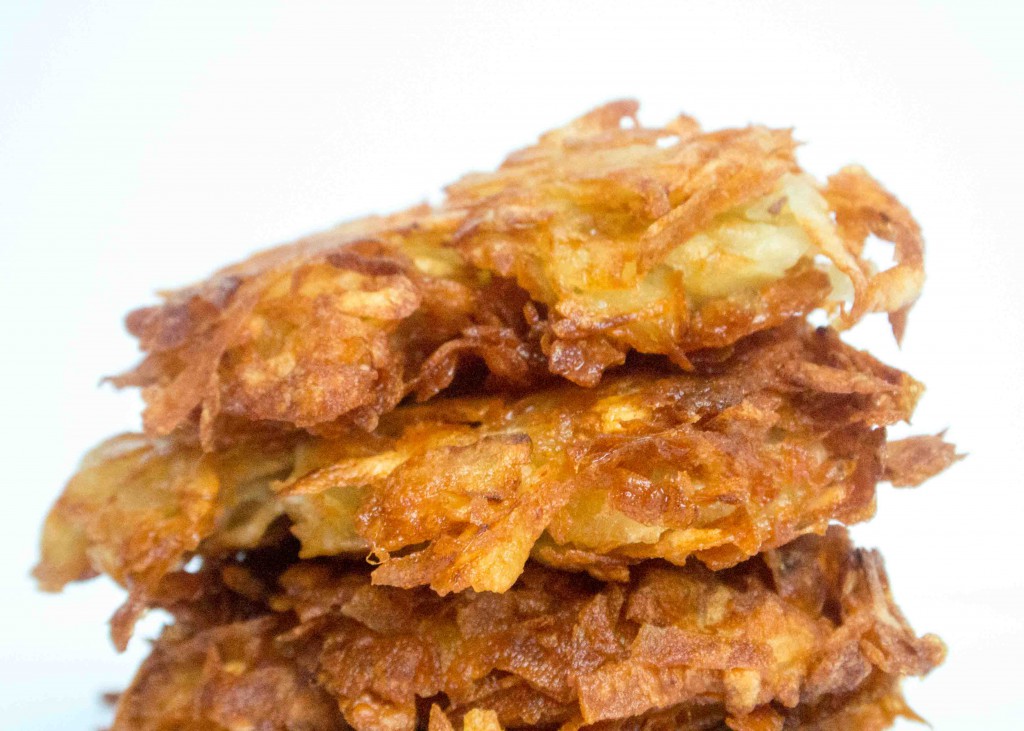 We also are very simple on toppings – usually just plain, or with ketchup – but traditional toppings include sour cream and/or applesauce. Latkes are best straight out of the frying pan, and I love the contrast of the hot, oily, crunchy potatoes and the cool, salty ketchup.

Latkes are a Hanukkah food because the oil used for frying is a hat-tip to the miracle of the oil burning for 8 days, but you would be hard-pressed to find someone who would turn down fried potato pancakes, whenever served.

And this brings me to the final Camp Latke issue: grating size.

I am a huge advocate of the grating disc that comes with food processors. But not for latkes. Grating discs are shaped to produce a 3-D grate, and you don’t have control over the length of the pieces, and it just doesn’t feel right. As a general rule, latkes are best when you make your dad hand-grate like 6 potatoes 🙂

I am never really looking for excuses to fry food in my kitchen, and I was nervous to make my dad’s recipe because I never had before – and I knew I couldn’t reproduce their box grater on short notice. The size of the potato grate is such an important piece! A friend recently made fun of my pint-sized box grater, which I have always had and never really thought about, but as it turns out, it looks comical amongst my other juiced-up kitchen tools, and in adult hands. It also it basically impossible to use it to grate a potato. It’s so small. But it fits perfectly on my shelf, and shall remain there for the time being.

Alas, I put my big-girl chef’s apron on (? is that a thing) and went to a local kitchen store, Hill’s Kitchen, to check out their grater selection (the store is definitely a neighborhood drop-in store, not an online retailer). I had many to choose from, and after discussion with their staff, I ended up with a plane grater (instead of box) that had a wider grate than I was hoping for. But, I reminded myself that fried potatoes are delicious, no matter the shape. 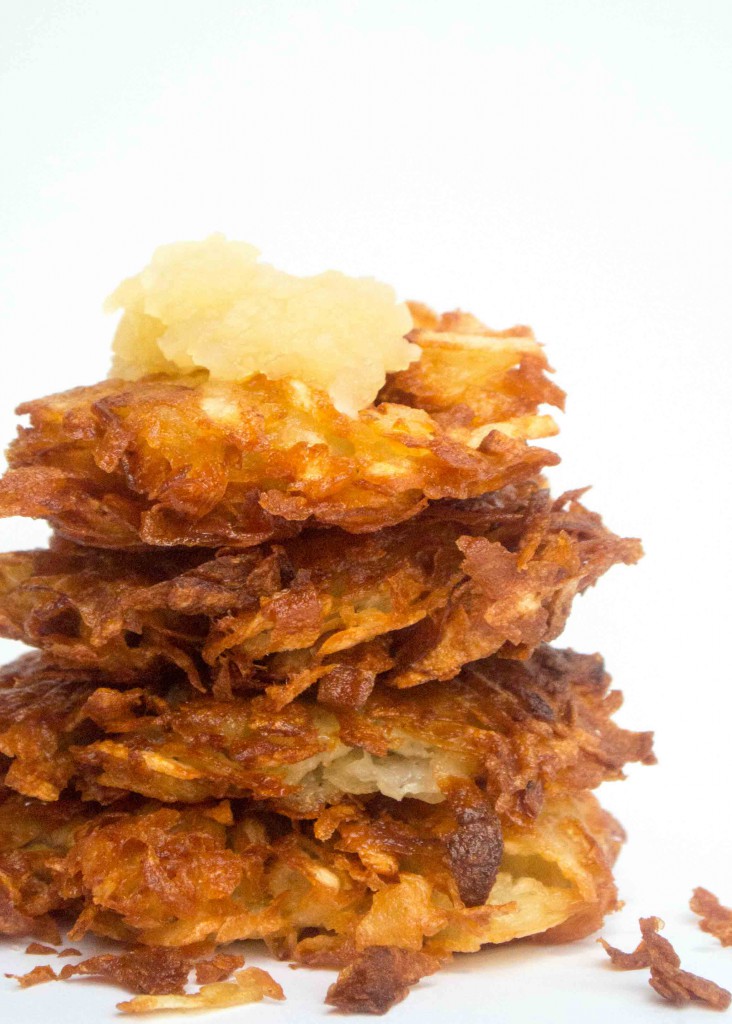 And now this is what my Potato Latkes look like, made with my own unique grater but inspired by my Dad. Enjoy!