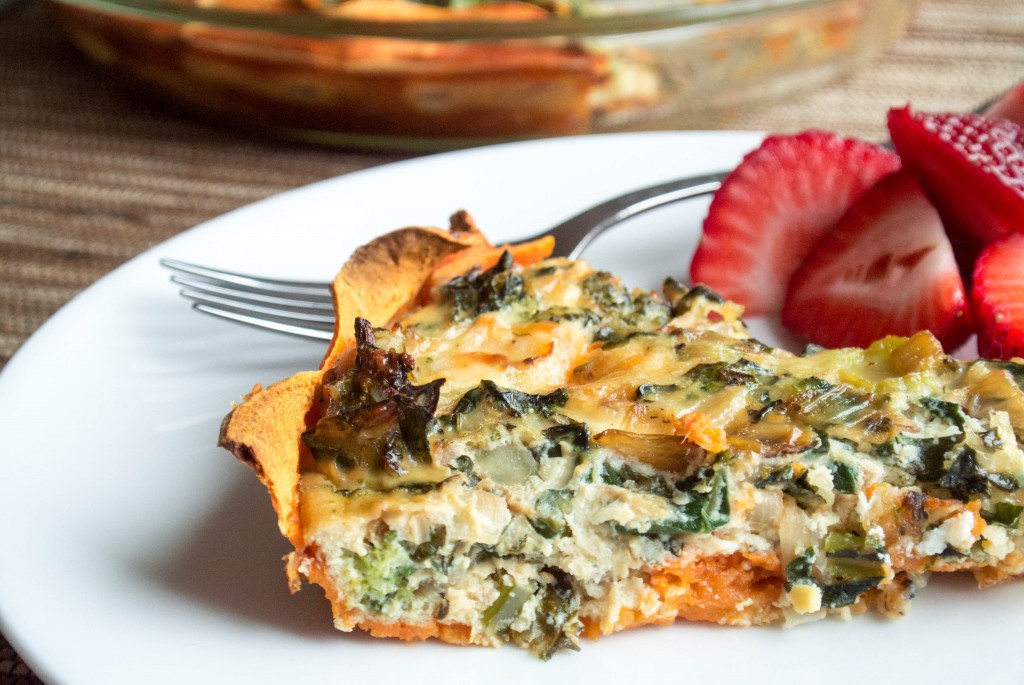 Bagel Bake, you have some gluten-free competition for “favorite brunch dish.” Graham Cracker Granola, you are lucky that you are also considered a snack, so you are not in jeopardy of being bumped for now.

This recipe was located and selected by AWP for our most recent Cooking Club (Hostess: AWP; Theme: Go Green; Date: 03.29.15). I saw “sweet potato” and “spinach” in the title of the recipe on the list she sent around: Yum; intrigued. But I also saw “crusted” and “quiche.” Two flaky thumbs down. I was torn. Love sweet potatoes, love spinach; but the other two words made me think of a dry and flaky dough, and extra calories and fat. I am just not a crusted quiche person.

Review of the recipe, however, revealed that there was no crust in the traditional sense. {Hence the quotation marks in the title of this post. See what I did there? “Crust.” Boom. It’s not really a crust!} I was also really skeptical of the sweet potato shell/(“crust”) – how would that work? Would it bake enough to slice through easily? Would it overbake and become crispy? Wouldn’t pouring eggs onto it be a terrible idea, with egg seeping through the crevices and sticking to the pan? I selected the recipe and decided to find out! 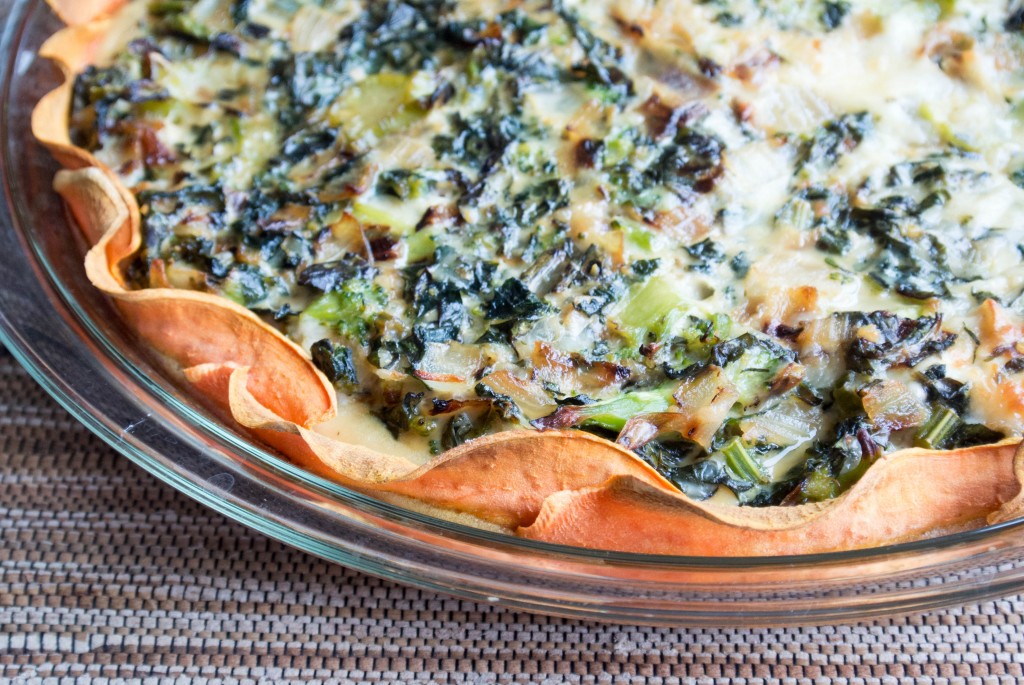 I have never billed myself as a food scientist, and that lack of certification continues with this recipe. I don’t know how it works, but it does, perfectly, each time I have made this recipe. The original recipe called for 6 small sweet potatoes – that would make a much thicker crust, which maybe you prefer, but which I don’t find necessary for this dish. The thin layer of sweet potato, and somehow the egg, actually give the quiche a sweet flavor, and more of it may be too much.

The most recent time I made this quiche, the sweet potatoes shrank and separated just a bit more than I would have liked. When I poured in the egg mixture, some did seep under the potatoes. I was totally surprised (and delighted) to find that it didn’t stick to the pan, and peeled off easily with a spatula. Who knew.

Some light internet research further revealed that quiches can have crusts or be crustless. They are defined by an egg-cream (or egg-milk) custard, with veggies, cheese, and/or meat mixed in. There is no milk or cream in this recipe, but after extensive discussion with consultant NP, we decided that this recipe should indeed be billed a quiche (but that “crust” should be in quotation marks). It was honestly a 10-minute, substantive discussion. This recipe was that deserving of our attention. It’s so good. 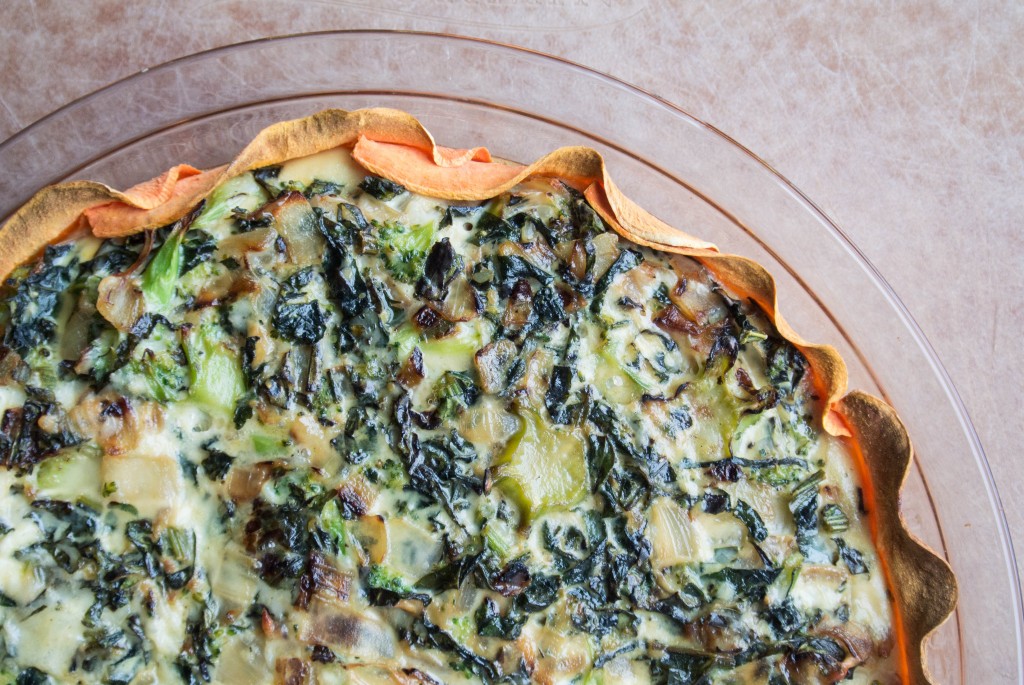 You can use any vegetables or cheese that you have on-hand for this recipe. You can add meat too, if you want! Crumbled sweet Italian turkey sausage would taste great in this dish, and would make it a bit more substantial (= heavier). The onion, kale, and broccoli that I used, when cooked, filled a large sauce pan, which I estimate at about 2.5 cups of (cooked) veggies. I reduced the amount of cheese in the original recipe, and replaced some whole eggs with egg whites. You could probably reduce the cheese a bit more (although the goat cheese had such a great flavor, so I would not omit it!). If you have herbs on hand like chives or dill, snip away! Add a teaspoon or two.

5.0 from 4 reviews
Kale and Egg Quiche with Sweet Potato "Crust"

Print
Prep time
30 mins
Cook time
30 mins
Total time
1 hour
Make this on the weekend and enjoy for weekday breakfasts (if it lasts!), or serve at a potluck or brunch. Adjust the veggies and cheeses to your tastes!
Author: myutensilcrock.com
Recipe type: Brunch, Breakfast
Serves: 9" quiche
Ingredients
Instructions
Notes
When planning portion size, base it on the egg serving. The two extra large eggs and two extra large egg whites in this recipe are roughly equivalent to 4 large eggs, so one quarter of the quiche would be one egg. With some fruit, that's probably a good serving for one person (and a quiche would serve 4 people). If you are bringing it to a brunch or potluck where there will be other dishes, people will probably take a smaller serving size, and one quiche would serve 8 people.
3.4.3177 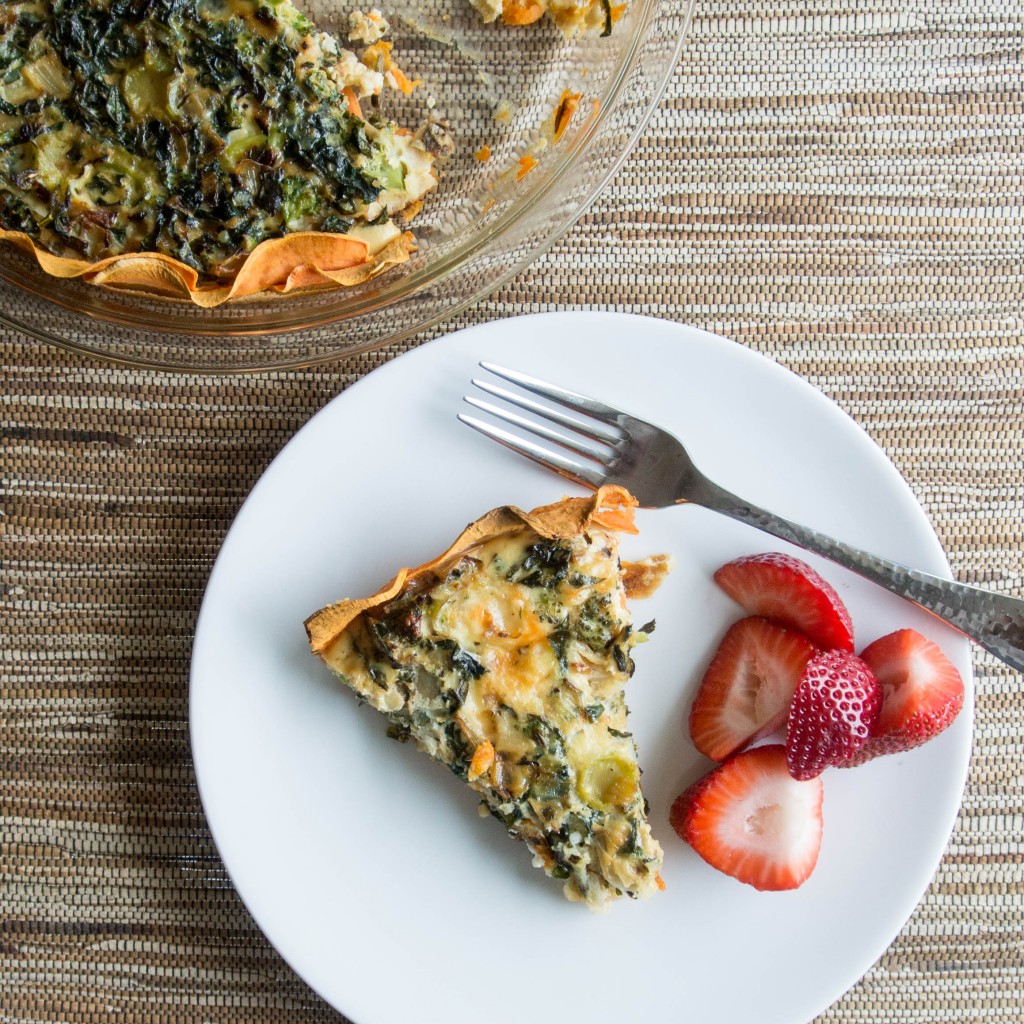 Reflections of Tazz in the smoked salmon packaging