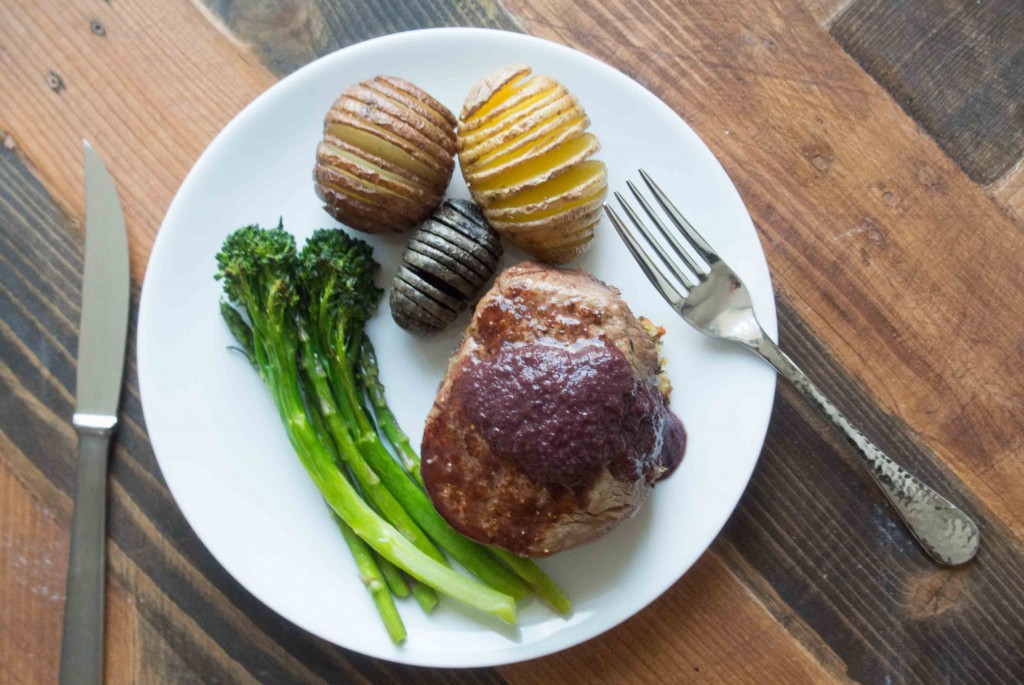 I am a meat and potatoes kind of girl. It’s how I grew up, it’s what I like, and I can’t deny it.

I don’t cook a lot of steaks at home though. I think steak is just one of those things that is better when eaten out. Is this because steak houses paint their steaks with butter? Hard to say. Haaaard to say. And living in an apartment, grilling is not a regular option, so I just tend to focus on other proteins when I am cooking. AND, I tend to try to eat lighter when I’m cooking at home, so I can not worry about calories when I am out.

But this recipe – it gets me. 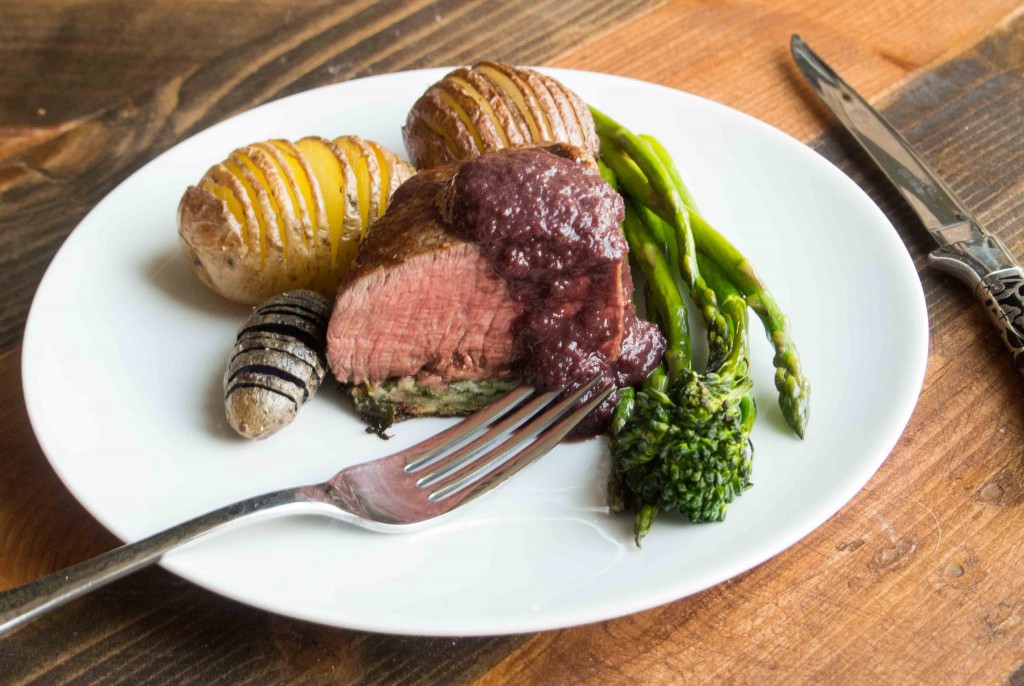 Lean filet mignon, with a little something extra but not too complicated – an herb crust on the bottom, and a rich but simple sauce over the top.

Made with red wine.

I told you it gets me.

This recipe is an oldie but goodie; we met at a Williams-Sonoma demonstration cooking class ages go. The printout says 2006, and that sounds about right (and also makes me feel old). My friend EB and I used to go to these classes to pick up tips here and there. I prefer hands-on classes, but on weeknights, it can be nice to not have to do the work (and the classes were shorter – and free).

The chef-instructor gave us so many modifications – including 10 minutes in the oven at 500 degrees that was not in the original recipe (!) – that the printed recipe is really just a starting point. My hand-written notes and wine stains on the paper are where all of the action is at. 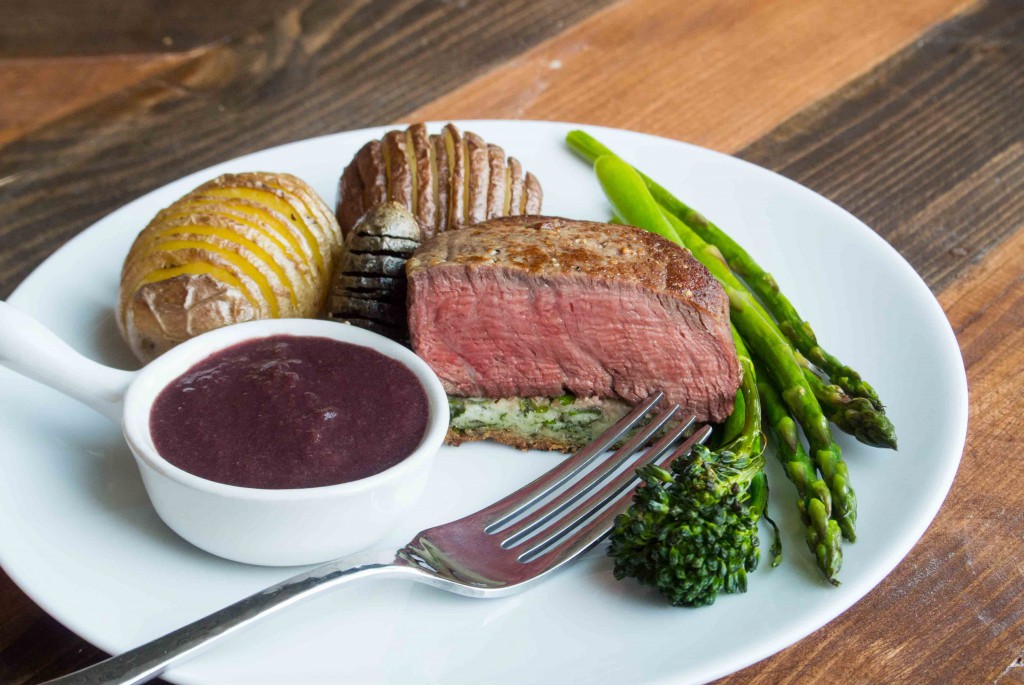 I have served this recipe for a few special occasions, including most recently this past New Year’s Eve. Don’t let the sauce scare you – it’s really just cooking some shallots, wine, and beef broth on the stove for a while and then blending it with the smallest pat of butter. And the rest of the bottle of wine will be just perfect with dinner! Broccolini and/or asparagus only take a few minutes to roast at a high heat in the oven, and your potato of choice will be a great addition to round out the plate.

Don’t let buying filet mignon scare you either! Just ask the butcher for two filets, about 2″ thick (it’s ok if it’s a little less or more). Yes, it’s a pricier cut of meat, but the quality will be high and you don’t need to do anything fancy to the steak to add flavor. The filets in these photos are from Trader Joe’s. They sell two in a package, and I have found the quality to be great! These were about 2.5″ thick.

I use a cast iron skillet with this recipe. If you have been reading along, you might have realized that I didn’t have a cast iron skillet until somewhat recently. So before I did, I just used a regular all-clad pan. However, I found the herb crust would separate from the steak more easily with that pan – I think the cast iron skillet helps form a thick, crunchy crust, and this most recent batch was my best. If you don’t have cast iron, just use anything that can go from the stove top to the oven. It will be fine (even if you have to replace the steak on the crust by hand).

One last tip: the wine! The chef suggested a red Zinfandel called Tamas. I haven’t looked very hard for this wine, but if you find it, let me know how it is! I just look for a wine that is described with words that sound like they would go with steak, at my price point, and that I otherwise will want to drink once I use one cup of it in the sauce. Trader Joe’s had many options when I was picking up the steaks (and potatoes, and broccolini and asparagus!). 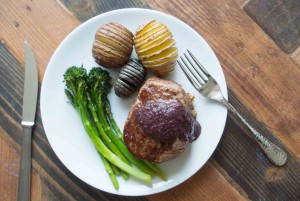 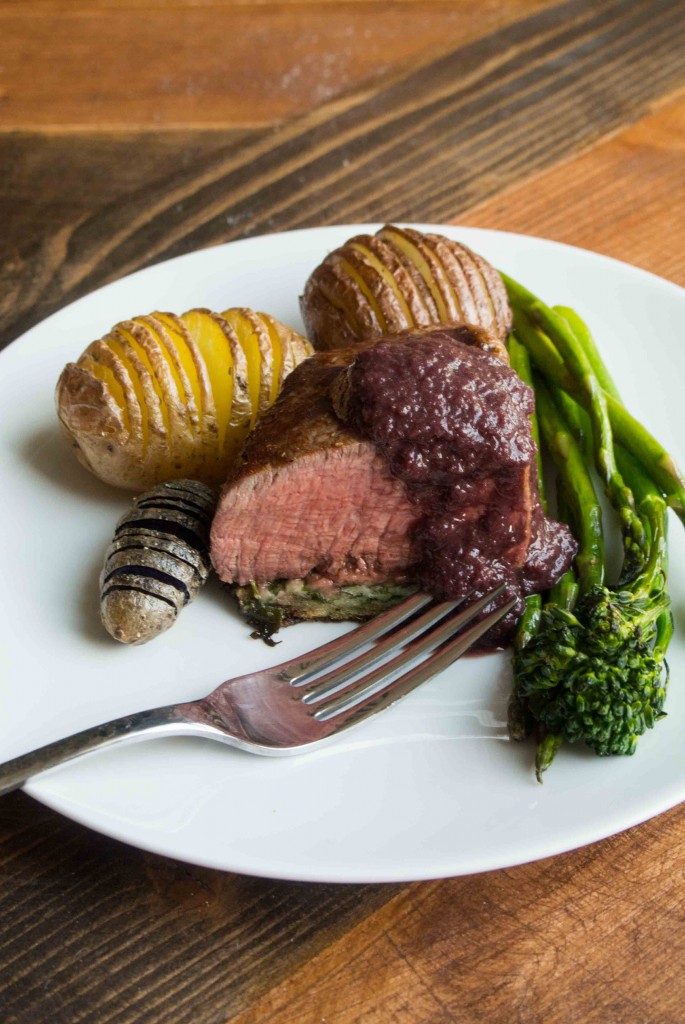 Not entirely indicative of what I’ve been eating

The baby shower is virtual, but the love and suppo

Good morning. That is all.

A little bite of normalcy. @bullfrogbagels #🥯

First go of the @kudugrills rotisserie on the @bre