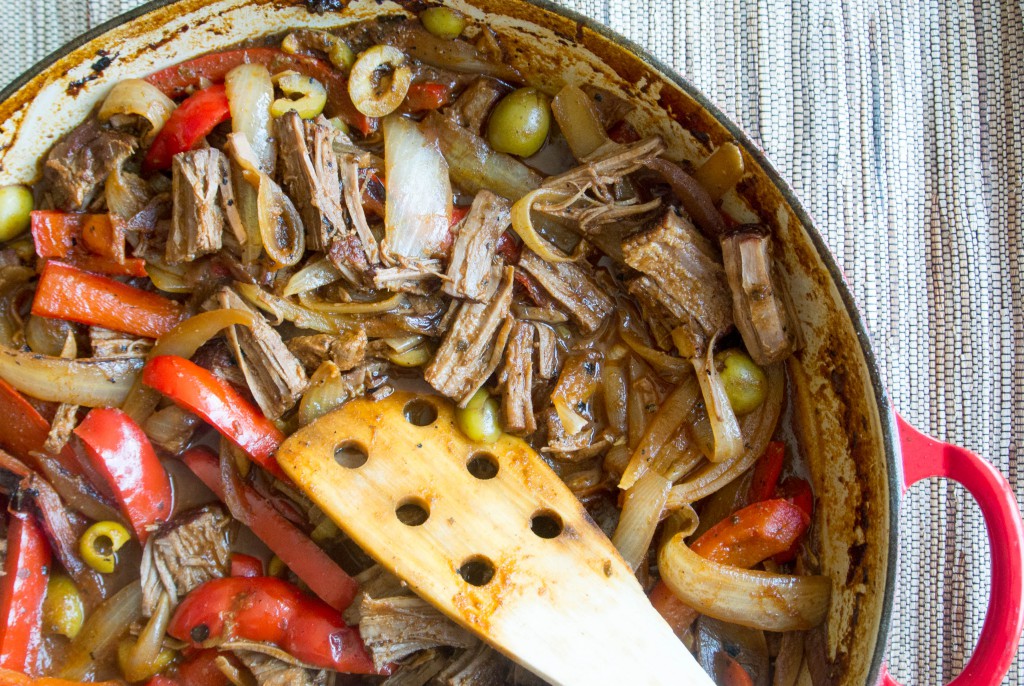 This is a recipe I would have shied away from when I first started cooking. Several techniques, “weird” ingredients, and do I even like “Ropa vieja“?

Well, let’s smash the why-I-can’t list with a meat mallet.

Upon further reflection, the “several techniques” were just a few rotations of searing (browning in a pan), and braising (cooking in liquid, no skill needed, a/k/a putting a pot in the oven and walking away). 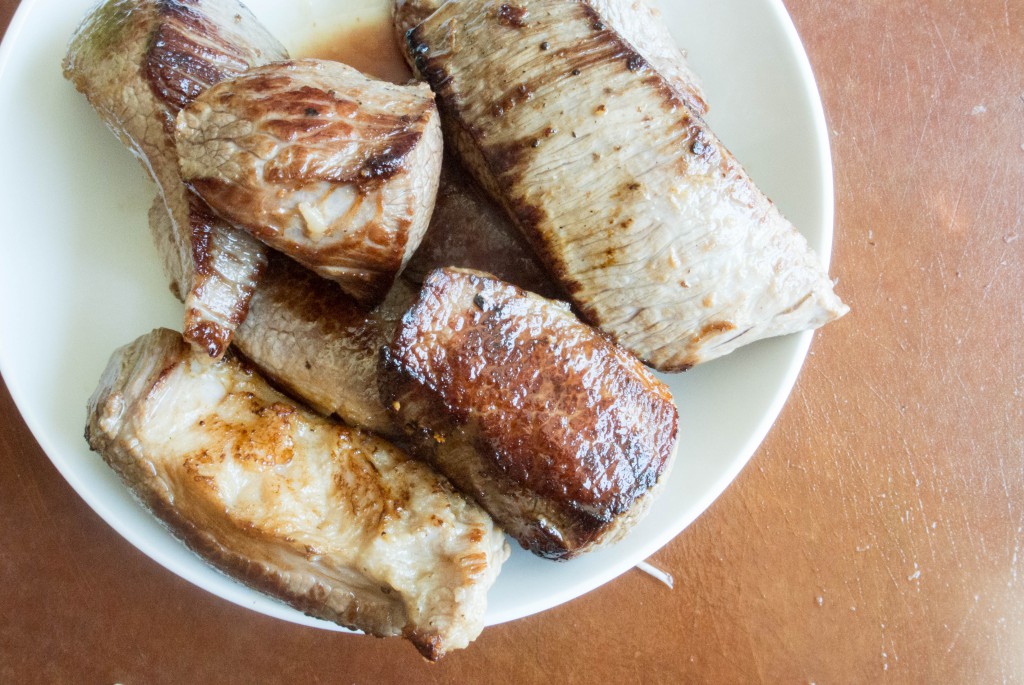 Searing = delicious and beautiful, not scary.

The “foreign” ingredients were red peppers – which I have found so versatile in cooking, that I have trained myself to appreciate them. When cooked. Not raw just yet. Baby steps. And green olives: I LOVED black olives growing up, and still do, but for some reason I have shied away from green. I went out on a limb and got a can of pitted green olives for this dish, and found myself snacking on the extras. What was I so scared of? And, two anchovy filets. I hear you on this one. But anchovy just adds salt and umami, “an almost indescribable fifth taste that takes your eating experience beyond salty, sweet, sour and bitter.” WHAT. Hard to resist, yes? {If the filets in the tin turn you off, anchovy paste in a tube would be a fine substitute.}

And yes, I do like Ropa Vieja. Turns out, I love it. “Cuban Braised Shredded Beef” – why didn’t you say so? Who doesn’t love braised shredded beef? This dish is made from brisket, which I love, and because I’m making it with my own two hands, I can discard fatty portions that may detract from the dish. I know, some people love fatty meat. Not this gal. 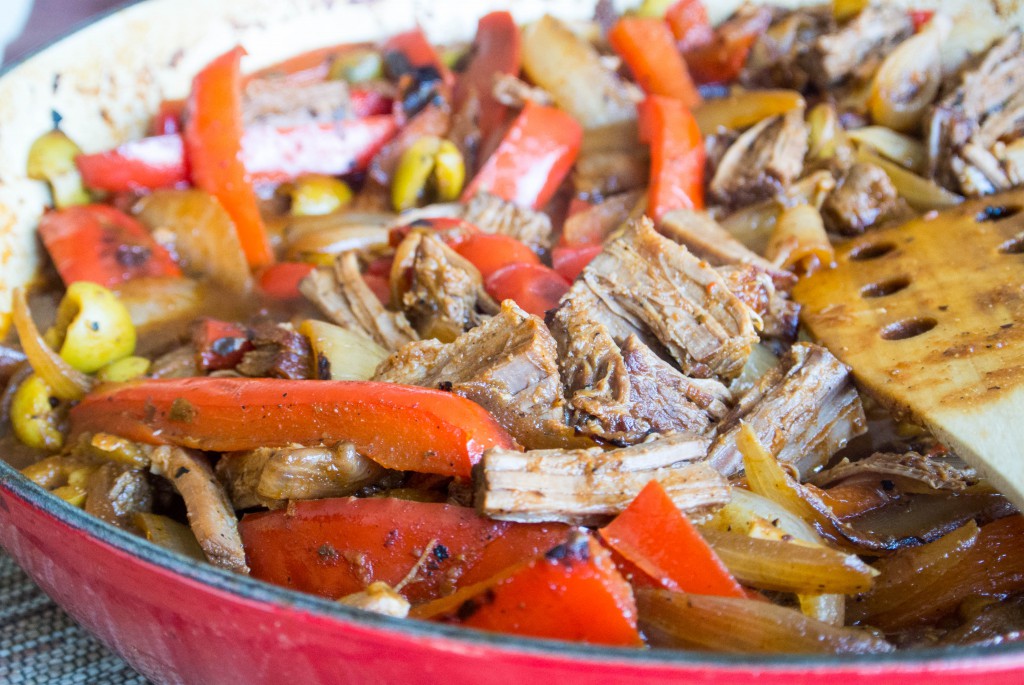 This dish is so good. 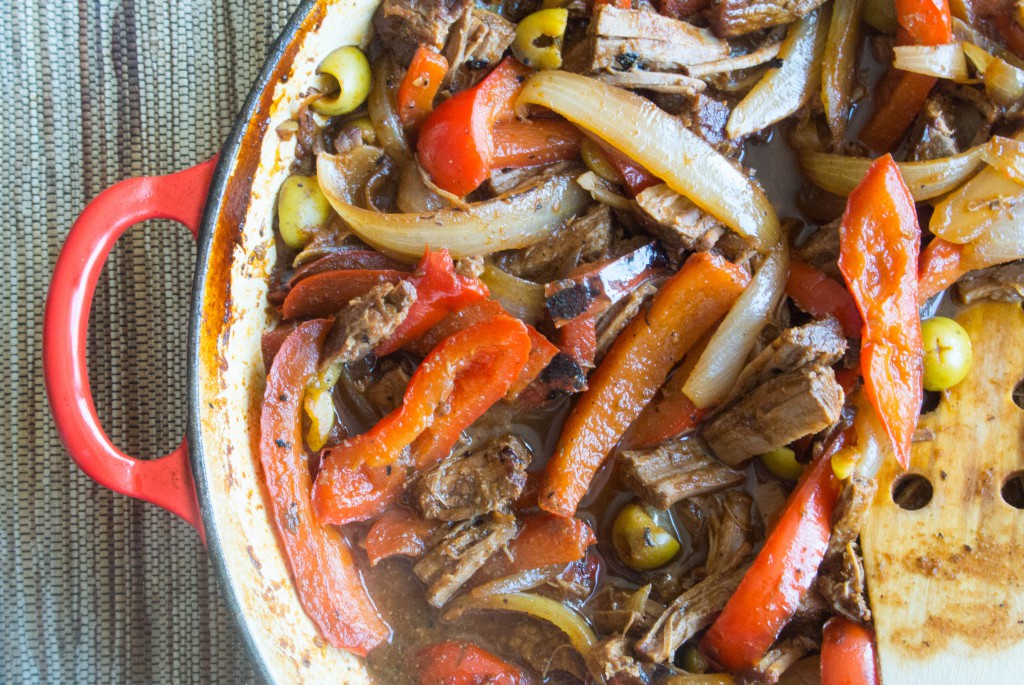 I have to admit that I didn’t realize brisket could be made this way. When I buy flat-cut a/k/a first cut brisket, I usually cook it whole and slice it to serve, like this Honey Mustard Brisket. But this recipe calls for the cut of meat to be sliced into 2″ strips, and the longer strips should be cut to about 5″. Visual aid: 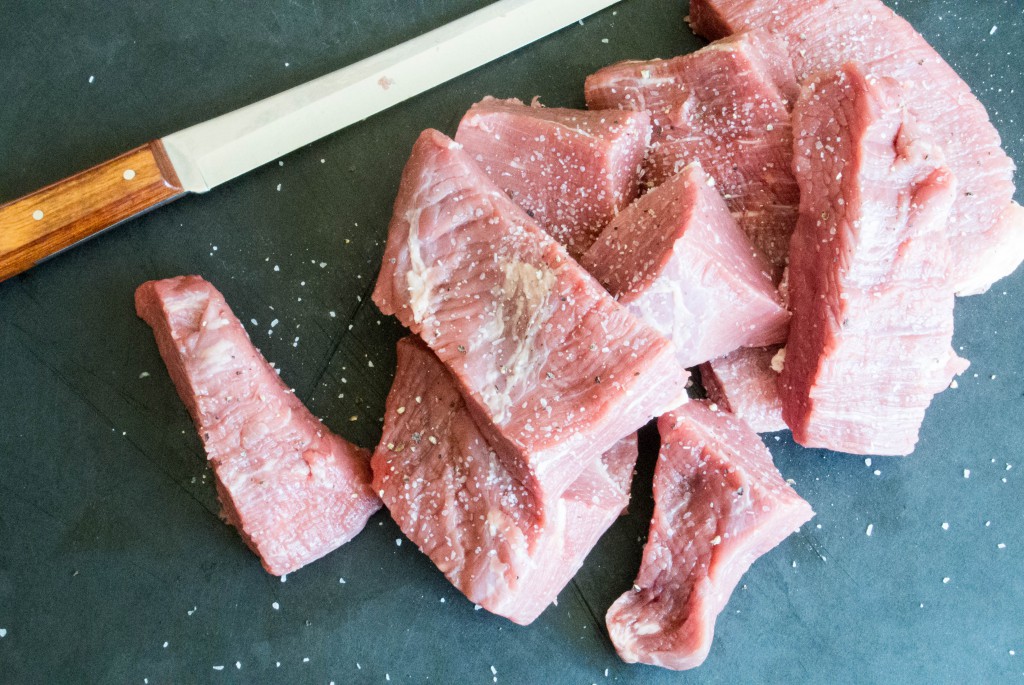 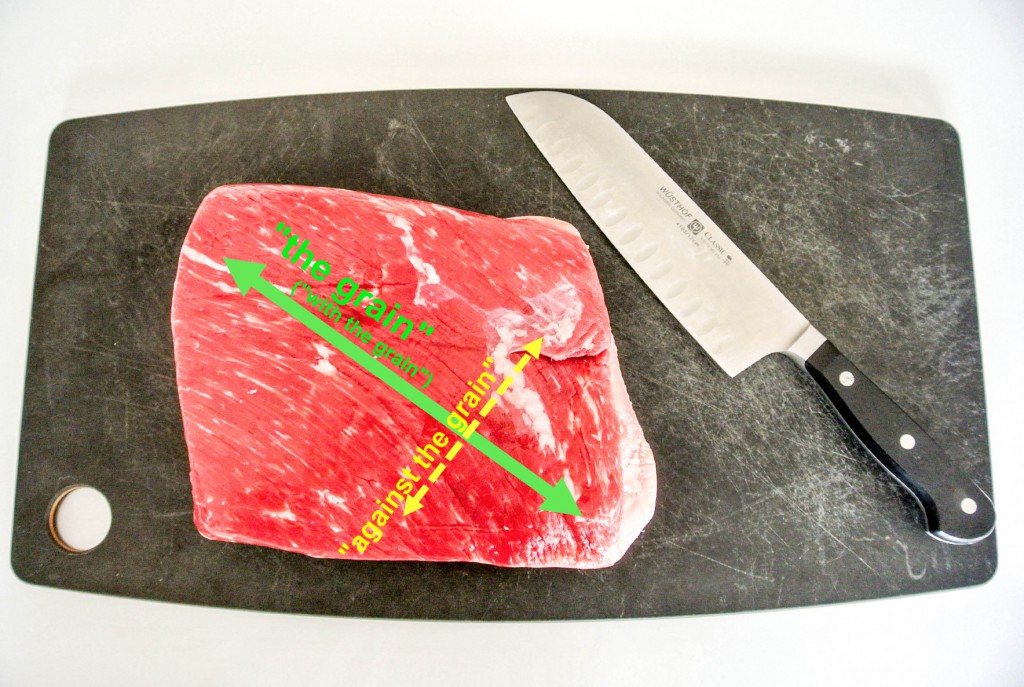 Prefer a cooked version? Pin this one instead: 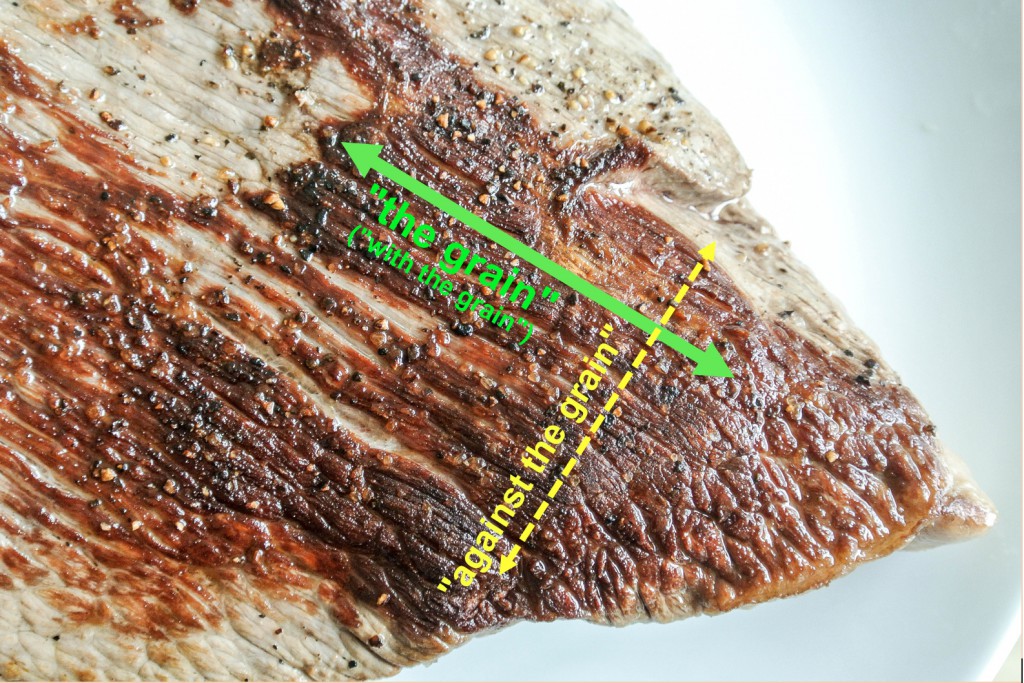 I made this Ropa Vieja last week to take to a friend who had surgery. We ate dinner together, and I left her another serving for later. I love recipes like this where the meat and vegetables are all in the same dish, so you don’t have to think of something else to make (and then actually make it). Two red peppers and two onions (and some tomato sauce) in the recipe check that box for me. I made rice to serve this recipe on… In my opinion, the sauce was so good, that the bland rice kind of detracted. I would recommend just serving from the dutch oven on the table, with some roasted potatoes and red wine! 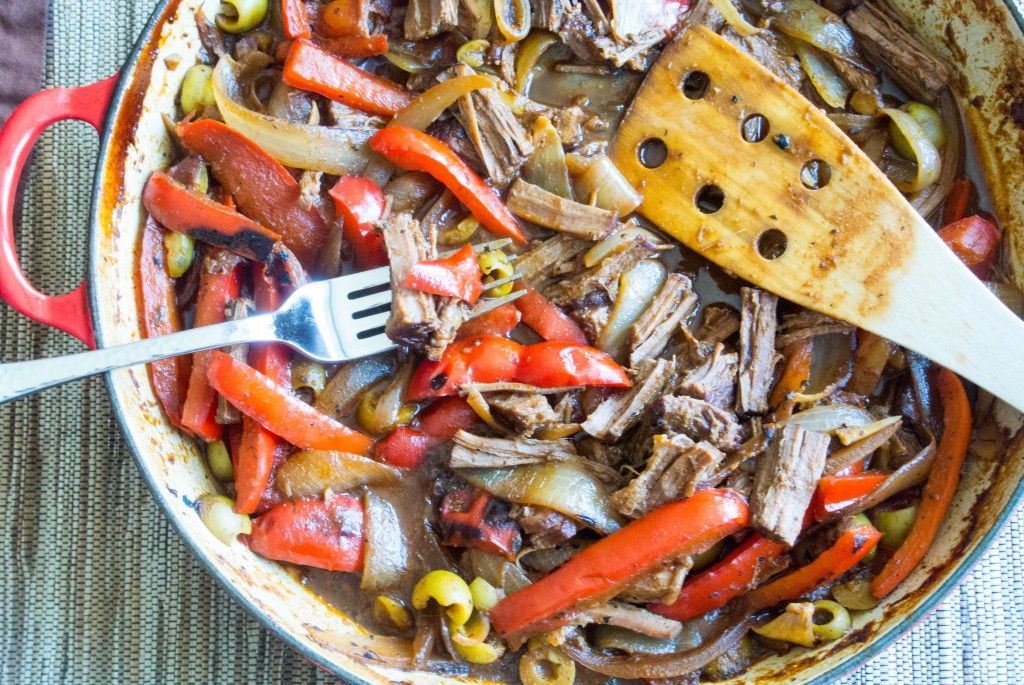