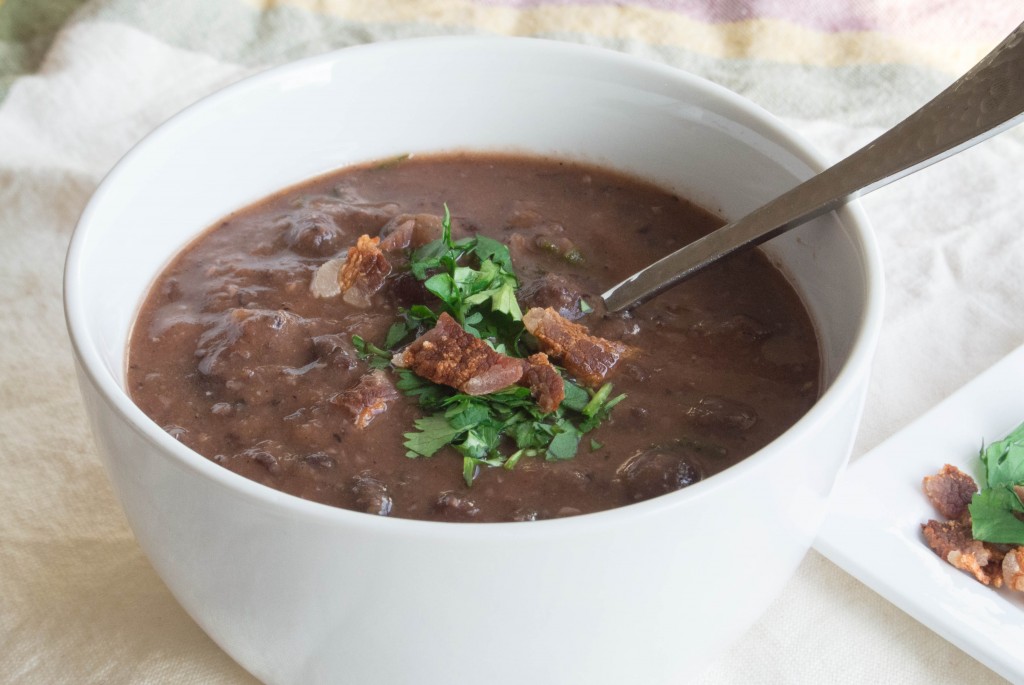 We had a reprieve in December, but it is squarely and completely winter now, at least in Washington, D.C. This past weekend we tallied about two feet of snow downtown (much more in some suburbs), and no one was happier about it than me. And my dog. You see, when you 1) live in a large apartment building that shovels for you, 2) don’t lose power or internet, 3) don’t have children to entertain for days on end, 4) have a dog to keep you company and act like a total puppy in the snow a few times a day, 5) have Netflix and OnDemand to binge-binge-binge, and 6) have a huge list of recipes to cook and bake… well, there was no downside to Snowzilla.

As a co-worker mentioned, that is a lot of variables, but for me, it was indeed the perfect storm.

Boom. See what I did there?

I admit that reacclimating into society has been a bit of a challenge after 4+ shut-in days, but in my experience, everyone has the same dazed look on their face upon returning to work. My boss said something yesterday that he thought would fire me up, and my calm response made me realize I was in post-vacation mode. Surprised us both. I told him to give me a few hours, and I would be back to feisty.

It never takes me long to get back to feisty. 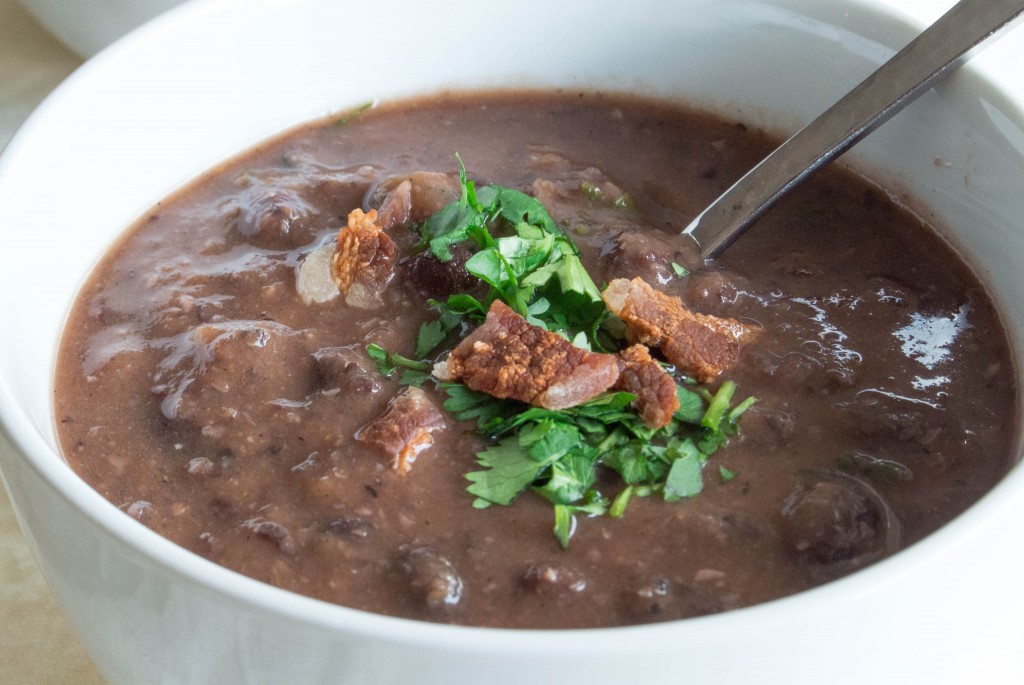 Until then, let’s talk about the ultimate cold-weather food. SOUP! It’s funny. Well soup is not funny, but wait for it… Most soups are just a product of cooking some things in a pot, for a little while or a longer while, and then sometimes blending some or all of it. That’s really it. But for some reason, a lot of people are scared to make soup. It’s funny to me.

When we started my Cooking Club, one of the rules was that when you selected your recipe that month from the provided menu, you had to try to make something you had not made before, whether using a certain ingredient, technique, etc. (we still try to use that guideline, but 10+ years in, it is harder to find “firsts” for everyone every month). Soup was one dish that routinely received a response of “I haven’t made a soup, I will try that course!”

Pro Cooking Club Tip: When storing and/or transporting soup, a snap-top pitcher is my preferred vessel. Takes less room in the fridge with the bonus of a functional pouring spout, and there is no concern about spilling in the car if your soup requires a change of venue. Just make sure the whole top of the pitcher can snap off, so you can ladle if you need to, and to help with clean-up. 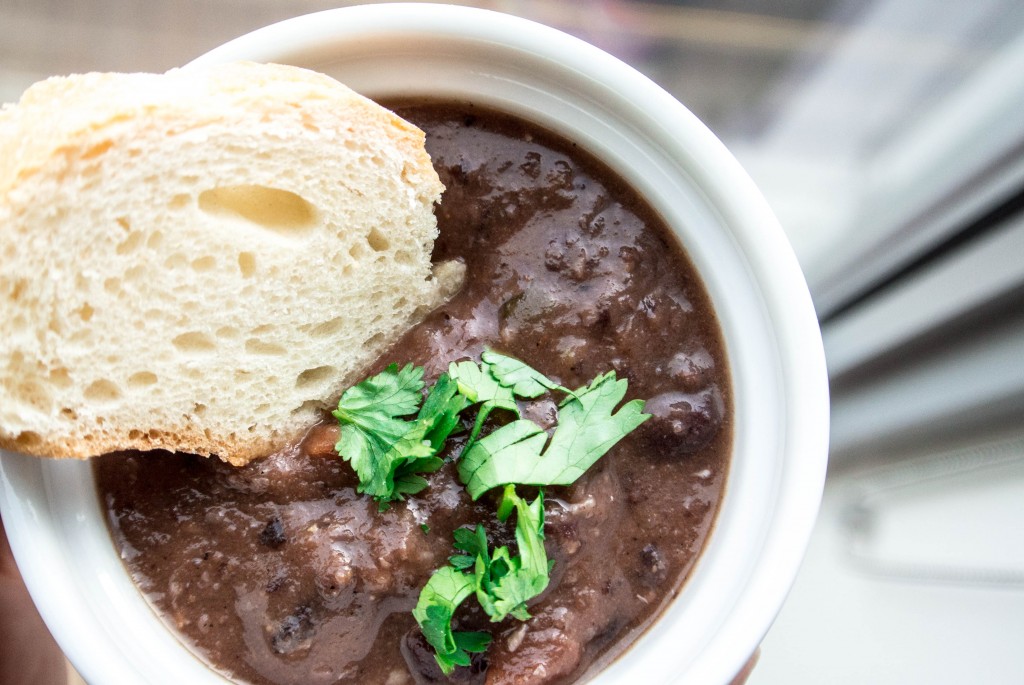 It struck me as odd, but before this recipe, I had never made a recipe using dried beans. Something so simple – just had not happened! Canned beans are so easy and relatively inexpensive, and convenient in that they are ready to use immediately. Dried beans, on the other hand, are easier/lighter to lug home from the grocery store, and have no sodium at all. But, they take hours to prep because they have to soak in water for many hours. I soaked this batch overnight. The directions said to cover them in 2″ of water, which I thought was a kind of random amount, but I did so, and lo and behold, the beans soaked up enough water to almost break the surface. One note on soaking beans: If you don’t get around to using them after the soak, rinse and drain them, and store them in the refrigerator in an airtight container, for no more than a few days. DO NOT, under any circumstance, leave them in the water on your kitchen counter for like 4 days. I don’t want to talk about it. Just don’t do it. Trust me. 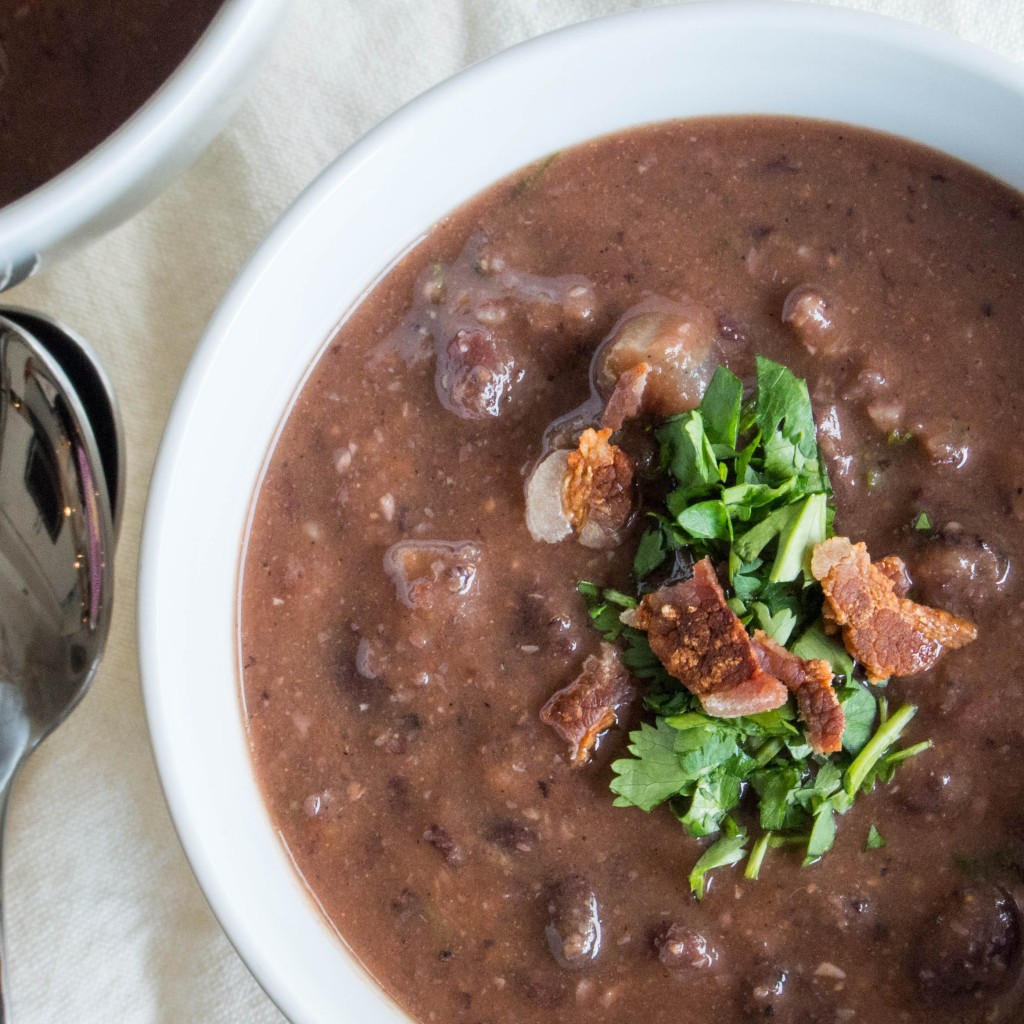 This recipe makes a large amount of soup – about 8 large bowls. I froze half of this batch and still had more than I knew what to do with. You can halve the recipe, or make it for a large group. Or stock up on freezable containers and always have a serving ready!

Note: Black Bean Soup is simply not photogenic. Not at all. No matter how many pictures you take of it, over the course of 3 days, hoping that maybe today it will be different. Until you top it with cilantro and bacon. Then, it can conquer the world. 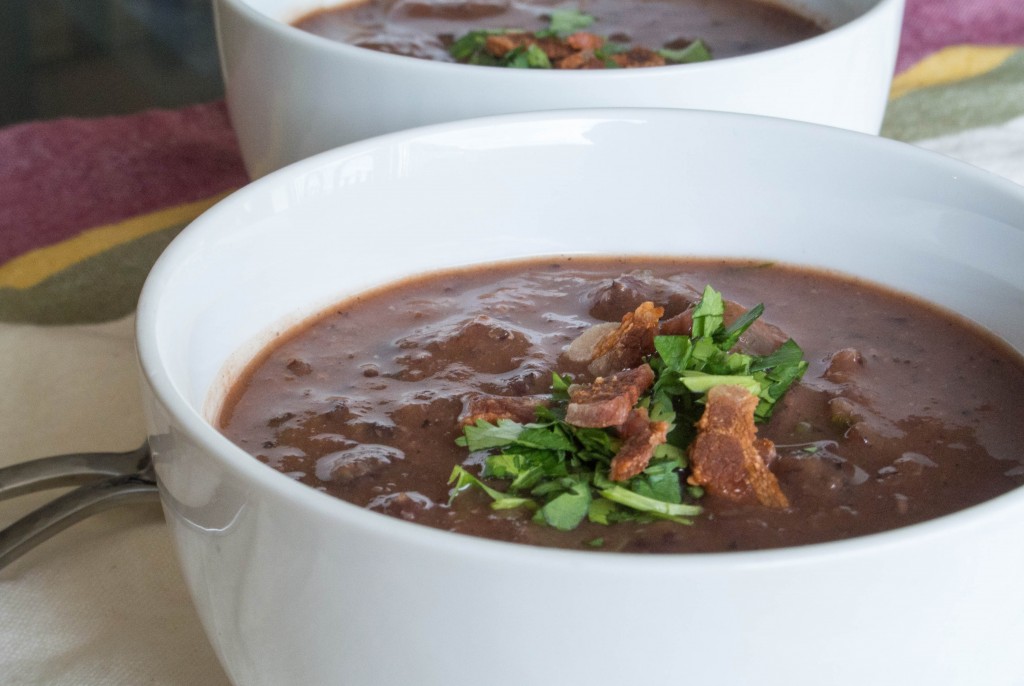 This recipe simmers for a while – well over an hour and a half once it is all assembled – so this is a good recipe to make when you are just home and otherwise occupied and can keep an eye on it. Like, during a blizzard for the history books.

Print
Prep time
20 mins
Cook time
2 hours
Total time
2 hours 20 mins
Who doesn't love soup on a cold day? This recipe simmers for a while – upwards of two hours – so this is a good recipe to make when you are home for the day and can keep a casual eye on it.
Author: myutensilcrock.com
Cuisine: Soup, Comfort food
Serves: 8 large bowls
Ingredients
Instructions
Rinse and soak the black beans (the night before):
Make the soup:
3.3.3077
Adapted from: http://www.health.com/health/recipe/0,,10000000642281,00.html