Last year, when it had been months and months since I had written a blog post, my mom asked if maybe I was moving on. After all, I wasn’t cooking, and Federalisms and delicious grEATings took a lot of my hands-on free time. I changed jobs within my organization about a year and a half ago too.  I am now really empowered to be as creative as I have capacity for, and I have a long series of “projects” at work that are supported and use my talents well. My need for a creative outlet seemed to be shifting.

At the time my mom asked that question, I just wasn’t totally feeling blogging. But I gave it some thought, considered why I had started the blog and why I had continued for as long as I had, and decided to refocus my efforts.  In 2013/14/15, I got pretty caught up in the food blogging world of driving traffic (although I never got into SEO), and what was popular and trending. But – other than kale (which was popular in that era!), I don’t know that I’m the trendy type.  I made a decision to just cook, photograph, and post what I wanted to, and to let the rest go. I felt better already!

But you guys, I forgot about connecting with people!  I’m so glad I’m cooking again, because I missed it, but also back online posting, because I have gotten such nice notes from readers from my last two posts.  Thank you!

As promised, following on my last post, here are 5 more Things that Tasted Good During Chemotherapy… and other “Cancer Foods.” For the other half of this list, click here to be taken to the last post.

This I stumbled on accidentally, but I’m not complaining.  The weekend before I started chemo, we had a family party planned. This was planned long before I was diagnosed and before we knew chemo would be starting the following Monday, people were coming in town for it, and there was no reason to cancel it. I originally was going to make dinner for about 18 people, but after things changed and I ended up on twilight sedation and getting my port inserted (imported?) that morning, we decided to bring in tacos and some deli trays. The party was a month before my dad’s birthday, and all of his relatives would be there, and I wanted to make SOMEthing, so I made one of his favorites – a chocolate layer cake with chocolate frosting. My friend AP made this cake for me a few years ago for my birthday, and it has become a staple. I’m going to do a post on it with the recipe in the next few months – I need the recipe more accessible than I currently have it, and you can’t miss this one. By the way, the cake wasn’t crooked in person – I think it’s an optical illusion from how it was frosted! Also, if you have a cake that ends up crooked, guess what it still tastes like.

Don’t you just want to dip your finger (or maybe even up to your elbow, or maybe your tongue?) into that frosting? Yumeroo.

I had extra frosting after frosting the cake. And there were many occasions over the following week or two when frosting was all that sounded good. I remember one morning when breakfast was fried (sautéed) salami chased by a few spoonfuls of chocolate frosting (not together!).  I made and frosted another cake before my surgery, knowing that my parents and I would be able to eat it no matter how we felt, and that I’d be down for the count for a while after. I packed a few pieces for the hospital, and I have to say, it came to my mind a few times the day of my surgery (which ended up getting pushed to like 5pm) and I looked forward to having it! It tasted exactly like what I wanted. 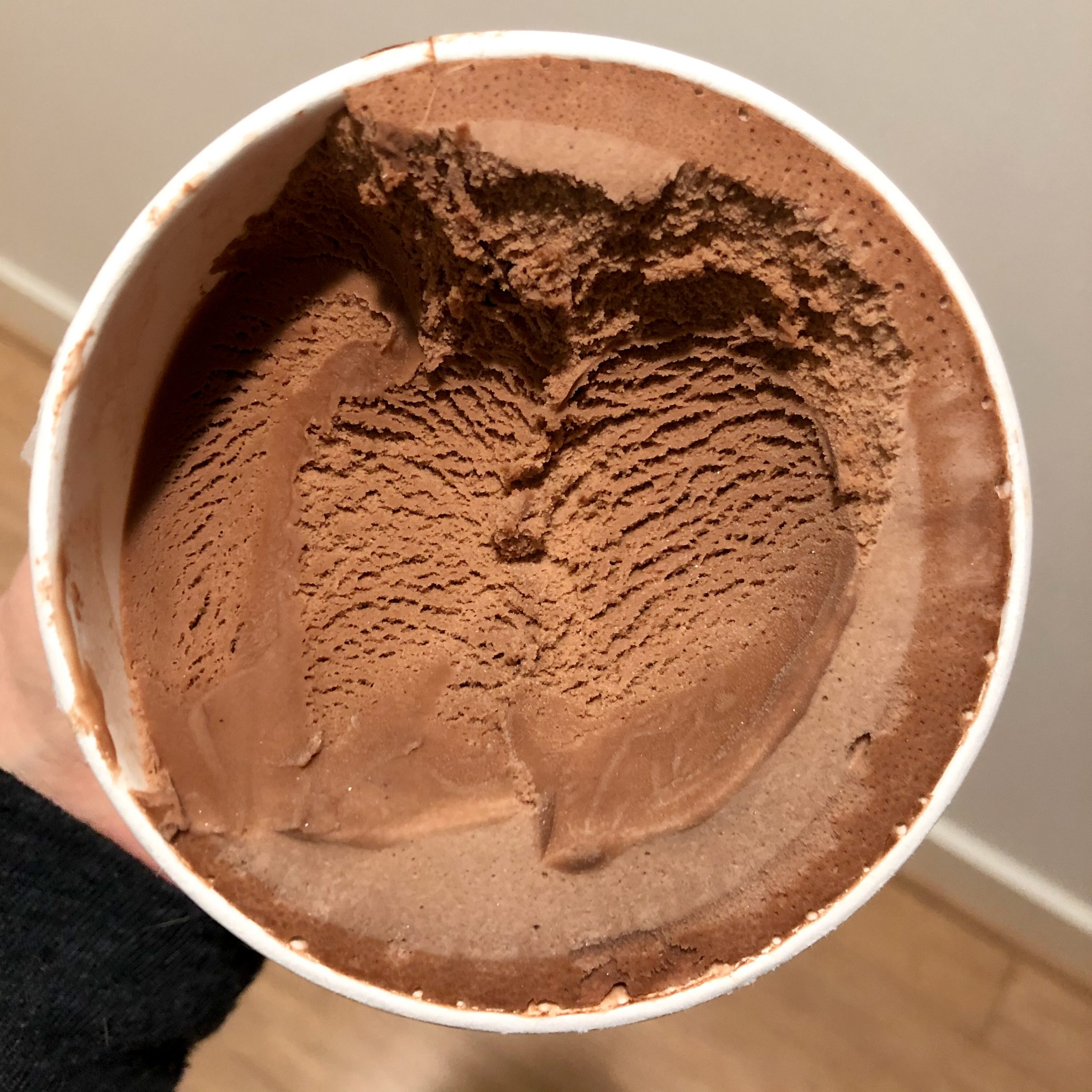 I will never deny that I am a chocolate person, and that did not change during chemo or other cancer treatment. I often wonder how much weight I would have lost if I hadn’t indulged in chocolate – because, I had quite a bit. There are some days during side effects from chemo that dairy is discouraged due to gastro-intestinal issues, and for those days, meet my best bud, chocolate coconut milk ice cream.  Chocolate coconut milk ice cream is made with coconut “milk” rather than dairy, and I can’t speak for other flavors, but chocolate at least does not taste like coconut. Just like a slightly different chocolate ice cream. I usually had a pint of Trader Joe’s in my freezer during treatment.

Let’s see. I was diagnosed officially on March 18, 2019, and later that week, headed up to Memorial Sloan Kettering for a second opinion on treatment (let me know if you ever need to talk about second opinions – they can be difficult, in that they often provide ANOTHER OPINION, but they are also invaluable). I took the train up from DC for the appointments (a day trip), and my parents flew in from Chicago. My brother who lives in New York was able to meet us as well. I am an entertainer and usually try to bring a homemade snack when I see family, but was not in baking mode during what was literally constant calls on two phones for weeks straight.  I hit Trader Joe’s and just dove in. I got some family favorites and special treats, including the sea salt petite brownies, crispy crunchy mini chocolate chip cookies, and peanut butter-stuffed pretzel bites. I wasn’t in chemo yet obviously, but I was so busy running around and otherwise really pre-occupied, that I had lost weight, and this was the beginning of my survival-mode snacking. These all come in pretty large portions, and lasted a while in what was the early days of my snack bucket.

I also love chocolate-covered coffee beans (Trader Joe’s or really any other brand), but I am the only coffee person in my family, so these did not make the trip to MSK with me. But I always had a container of chocolate-covered coffee beans in my snack bucket, and at work too, for a little sugar and caffeine boost. These were also a law school staple for me (from the Harris Teeter bulk bins). Just FYI.

As I mentioned in my last post, it was really fun to receive snacks from friends, too. The first bag of snacks I received was from SSC, and was jam-packed with wonders from Trader Joe’s. Included was a box each of mini milk chocolate bars and mini dark chocolate bars. Leading up to cancer, I was a very healthy person, and I looked at the two boxes of chocolate like they were special treats. But! I quickly reminded myself that I GOT TO EAT WHATEVER I WANTED, particularly during chemo.

I metered them out slowly during chemo, sharing with friends when they saw them in the snack bucket, and when I got to the last one, I smiled. I was done with chemo. I thought I snapped a photo of this moment, but can’t find it. Just imagine a nearly-empty box 🙂

9. A collection of foods that I loosely refer to as ITALIAN FOOD

Such appetizing treats included, but were not limited to, spaghetti and meatballs, meatball pizza, and just a bowl of noodles (with butter).

Spaghetti and meatballs came first. In the days after my biopsy (remember – I knew something was wrong at my biopsy when they tested my lymph node) while I waited for results, I asked some friends to please distract me. And, they delivered! One of the distractions was a Sur la Table cooking class, where we made homemade pasta and meatballs. I made this dish at home the day of my “chemo orientation” – which was actually a really great day. And I have made the meatballs many times since – a post is in the works for them (photos already taken!). So good, and really easy.

I also ate a LOT more pizza than I am used to eating.

I used to be able to count on one hand how many times I had pizza in a year… that has surely flipped. I had pizza probably once a week (maybe more?) in 2019. I am trying to ramp that down for health purposes, but, as it turns out, I actually really like pizza, it’s very easy to procure, and it always sounds good. Maybe this is how everyone else in the world always feels about pizza? This particular featured pizza is a spicy meatball pizza (with tiny bacon pieces under the cheese!) from Matchbox, which is my Matchbox order.

Noodles, with just a pat of melted butter, were a guilty pleasure. While I generally try to limit carbs and butter… not during 2019. When you’re told to “just get calories in,” sometimes a comfort bowl of pasta and melted butter, with your sorority t-shirt blanket on your couch, is the best medicine. 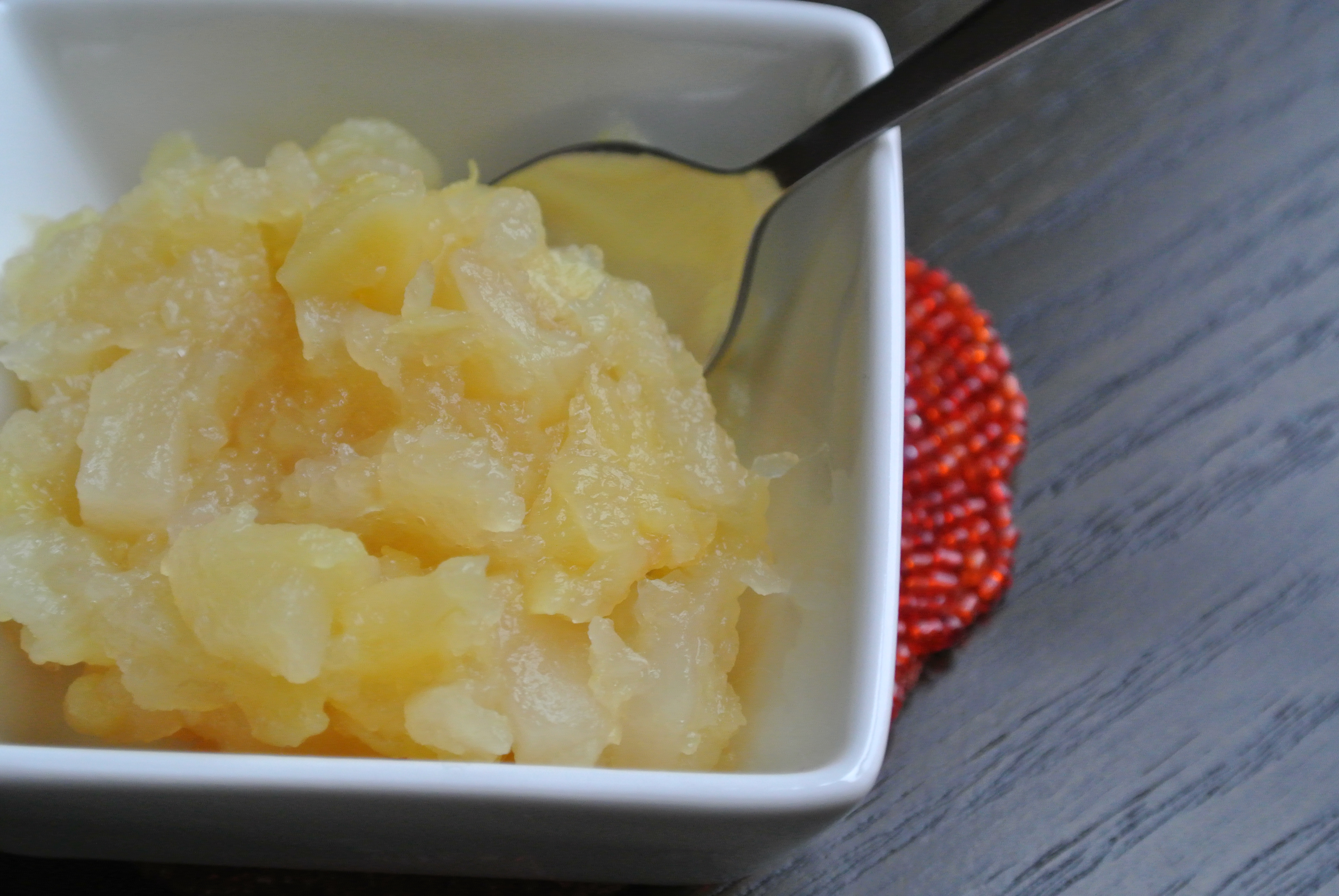 Bet you didn’t see that one coming after the onslaught of chocolate these two posts have been.

I kind of go in waves with applesauce. It’s really a great snack to have around, but I just never think to buy it. I did during chemo! It was cool, sweet (although I buy unsweetened), easy to serve myself (… sometimes just out of the jar with a spoon), light but filling, and easy on my stomach. I also kept single-serve packs at work, because if figuring out what to eat was hard at home… at work, ten times so.

The photo above is from a blog post a while back (almost 7 years ago!!) on homemade applesauce. I promise I was not peeling and chopping apples during chemo, but the photo worked.

So that’s my list! There were definitely one-hit wonders, and I will probably remember more steady faves too, but these 10 items/categories stand out to me as food I ate – and really enjoyed – during chemo and when food just didn’t sound appealing to me. If you went through a difficult medical period and have foods that stand out to you as something that was delicious, feel free to leave it in the comments!