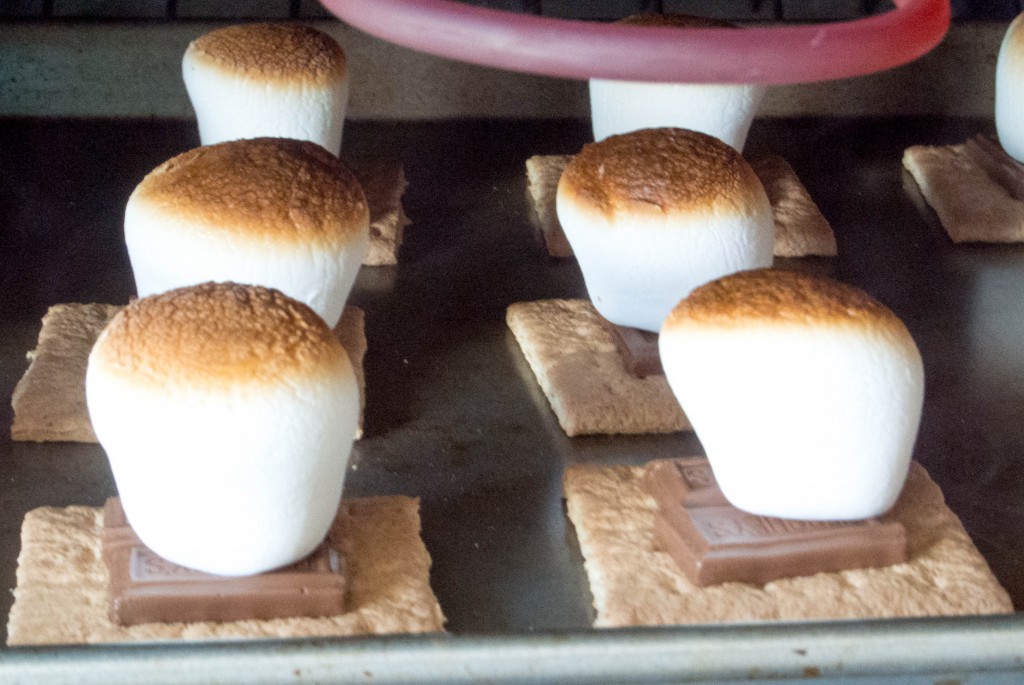 As summer comes to a close this evening, I would like to pay homage to a favorite taste of summer*: The S’More. 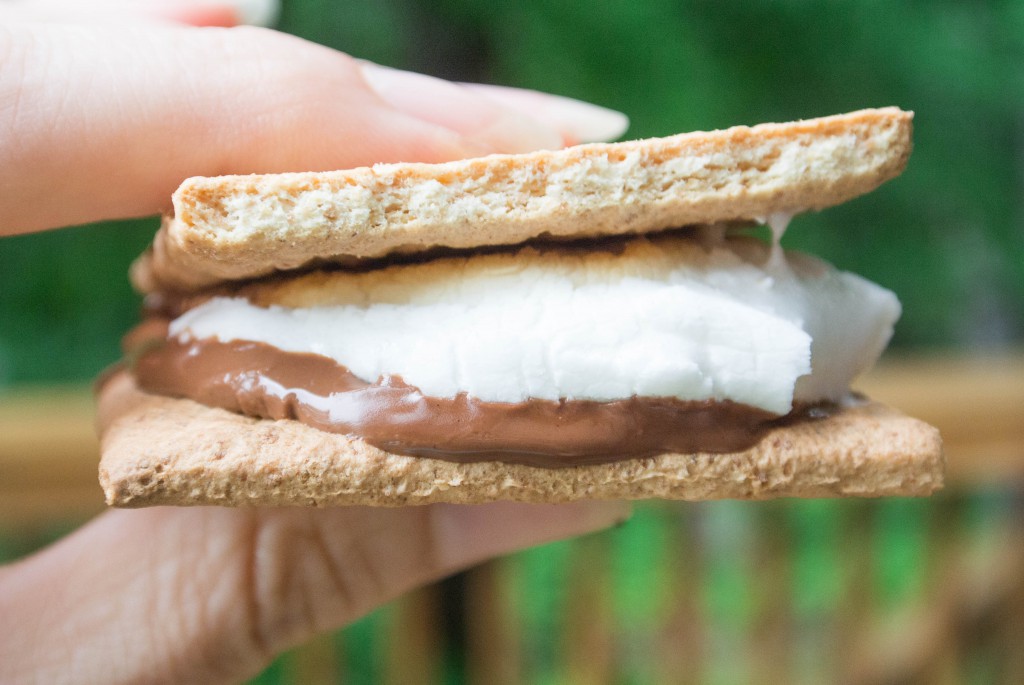 * Also fall, and winter. And I have never turned down a Spring S’More.

My cousin SFH put the idea for Indoor S’Mores for a Group in my head before her annual July 4 party this year, and it has been looming large since then. She explained that she wanted to make S’Mores for her guests and asked if she could make my Microwave S’Mores for a sizable group, in advance. Apartment living has so many perks, but darned if a fire pit wouldn’t come in handy for times like these! I told her I didn’t think the microwave would work out, but the oven would be a good alternative. I quickly successfully made one lonely S’More in the oven, and sent her a few links to blogs that seemed to have decent explanations for that method, and she reported back good results.

But I wanted to do it, and make a test batch (or 4), and post about it. My job SO gets in the way of critical research and development like this. 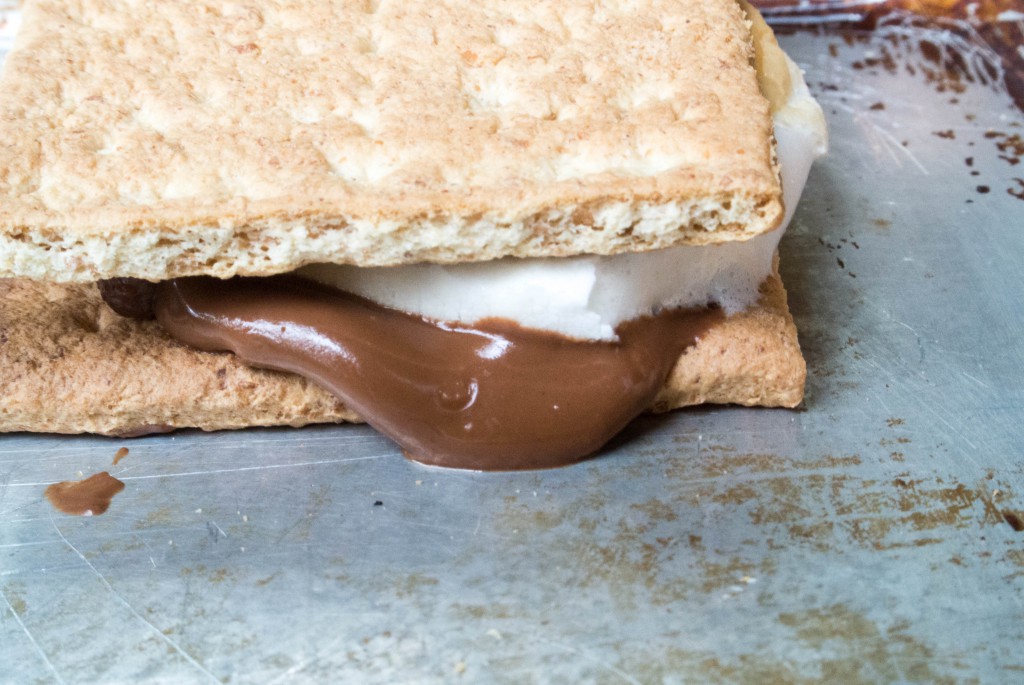 Making a large tray of S’mores is just something I wouldn’t let myself do by myself. One of the first questions people ask me when they learn I like to bake and cook is “How do you not eat it all?!” Well, some things I would. Like this: 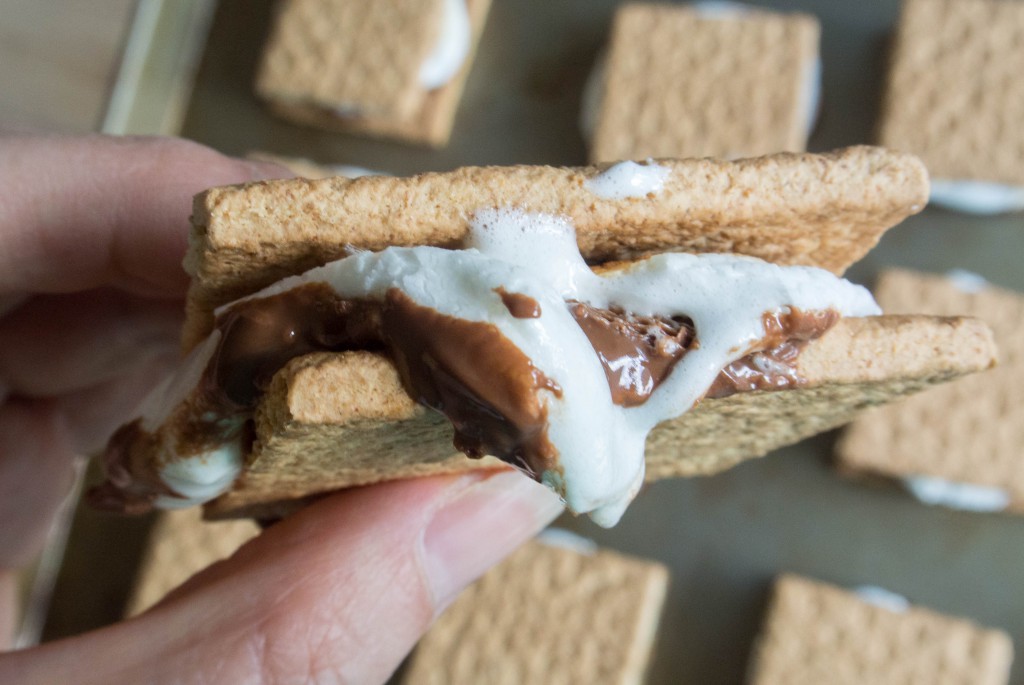 I would own that tray of S’mores. And, actually, I did. Did you know that S’mores will keep in an airtight container on your counter for at least 5 days? Now you know. {Um, no reason. Totally unrelated to that actual tray of S’Mores, I swear…}

So in August at LS’s Bachelorette weekend, I told the group that I wanted to do a post on making a large quantity of S’Mores inside, and they were my guinea pigs.  There were no objections; there was some confusion about why I would think that there were people who might opt out; and funny enough, there was a good deal of stimulating discussion about many aspects of S’Mores – I loved it! {And I also loved my photo shoot with the bachelorette herself!} 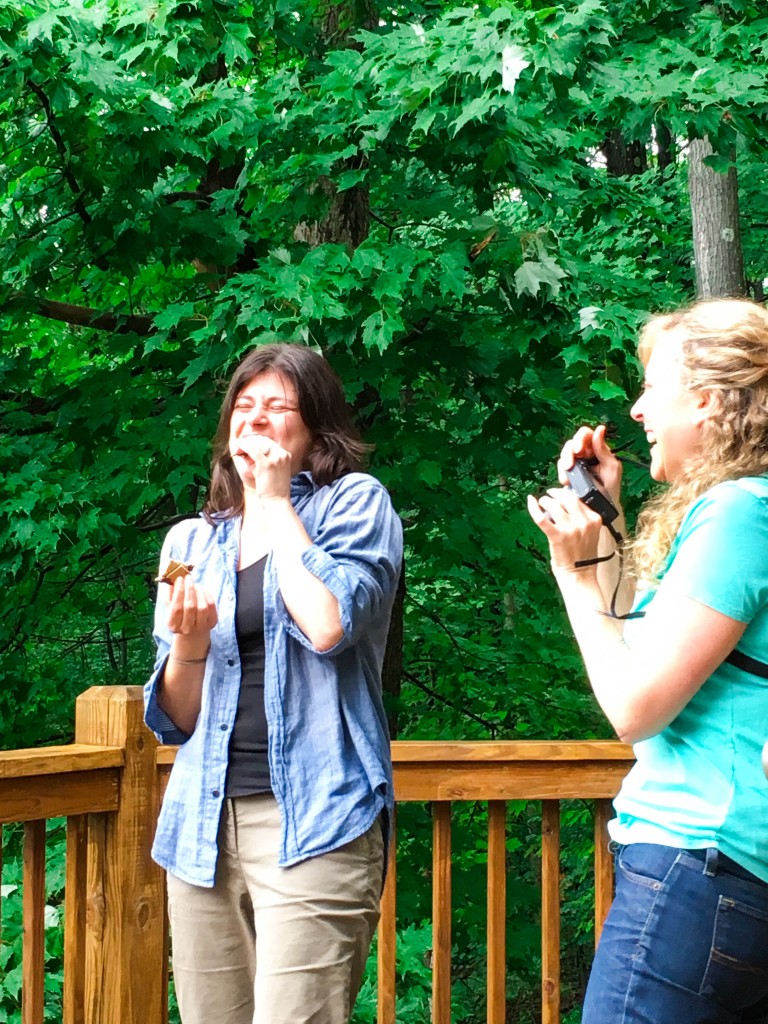 So, I got to work. Did you know that one box of graham crackers and 4 hershey bars will yield you exactly 24 S’Mores? I tell you, serious R&D here.

Part of the S’Mores discourse revolved around Hershey’s chocolate. Now, I am the type of chocoholic that might prefer one chocolate to another, but would never turn down chocolate. But as my friends develop more refined palates – palates that have lived in foreign countries and/or gravitate toward dark chocolate – some have become skeptical of a good ol’ Hershey Bar. But they were all troopers – selfless, even – and tried a S’More for the team. 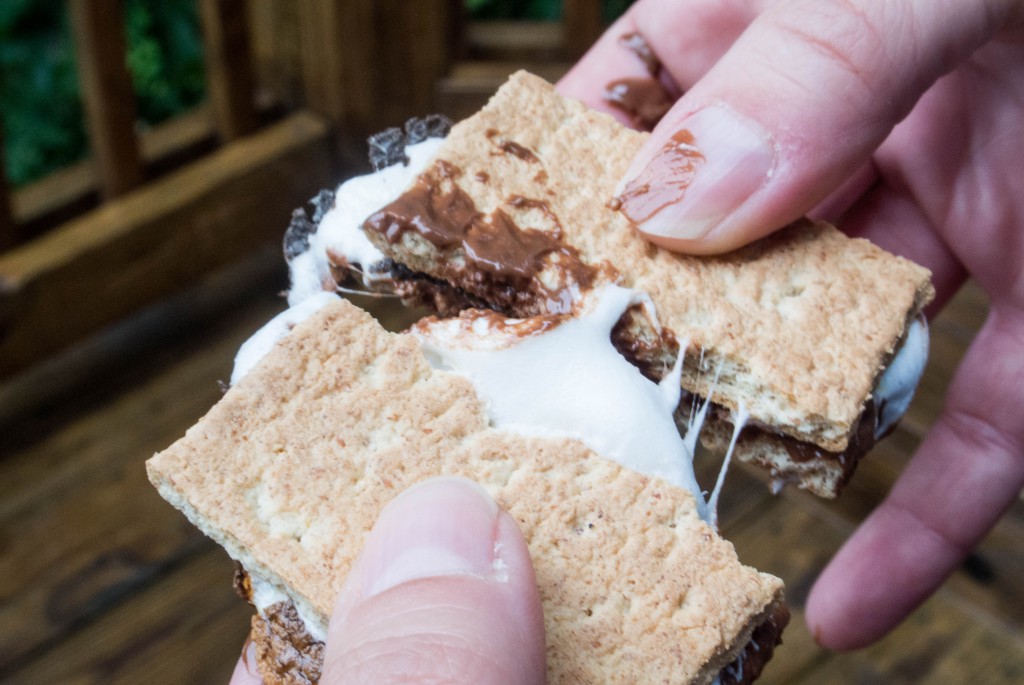 Without fail, every person who had had doubts about Hershey chocolate said that maybe that’s what had been missing from their S’Mores attempts. A taste of nostalgia, or maybe actual chocolate science. Maybe we will never know. There was another eddy carrying the notion that S’Mores in general were too sweet and the chocolate didn’t melt right. That it was weird when the marshmallows were melted but the chocolate was solid and kind of cold. We rectified these prejudices by using just 2 squares (“pips”) of Hershey’s; the few minutes in the oven under the heating element warmed the chocolate through as well. 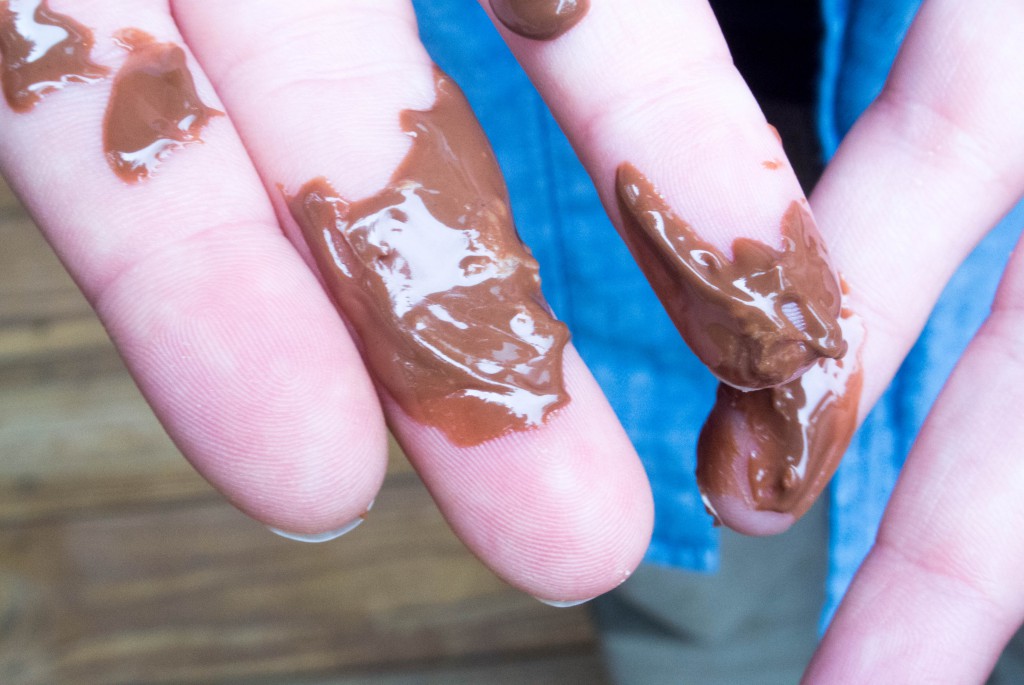 Without further ado, to assembling we go.

Break the rectangle graham cracker boards into squares, and lay 12 squares on a rimmed baking sheet. Top each with 2 pips of Hershey’s chocolate. 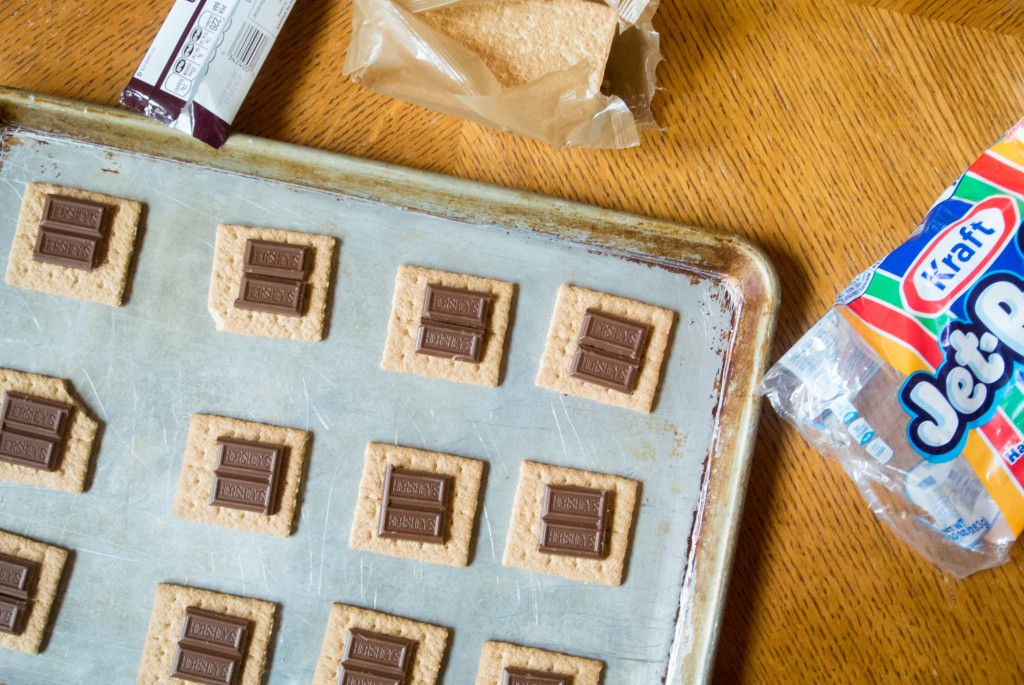 Pop the marshmallows on, flat sides up and down so they don’t roll away. 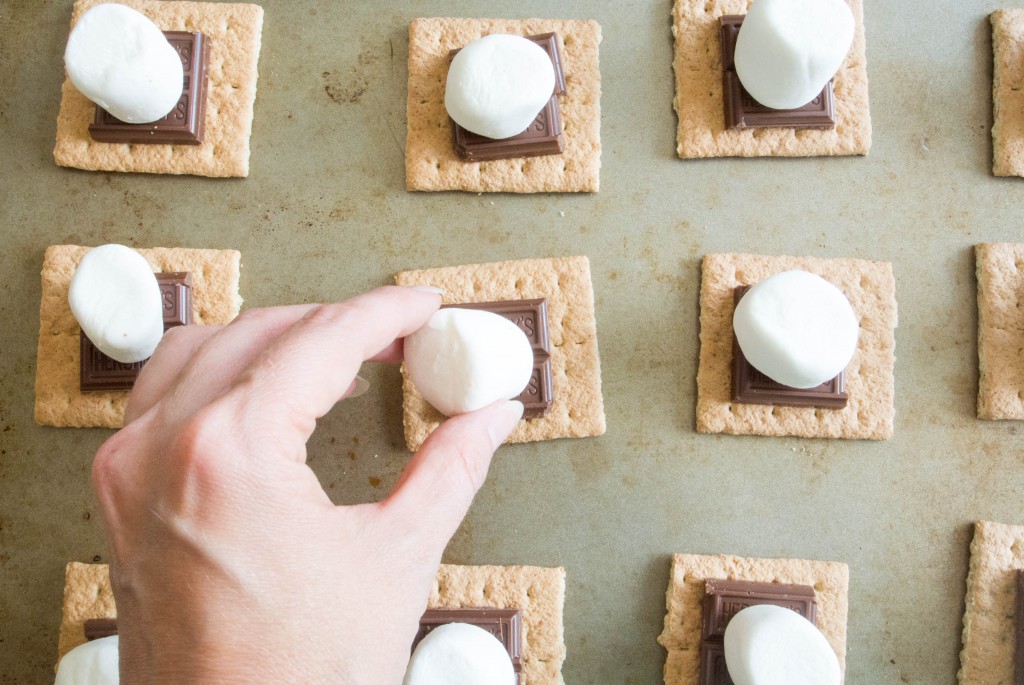 With the briefest of blasts under the broiler, or at 450 degrees if you are not a broiler type, and you get this: 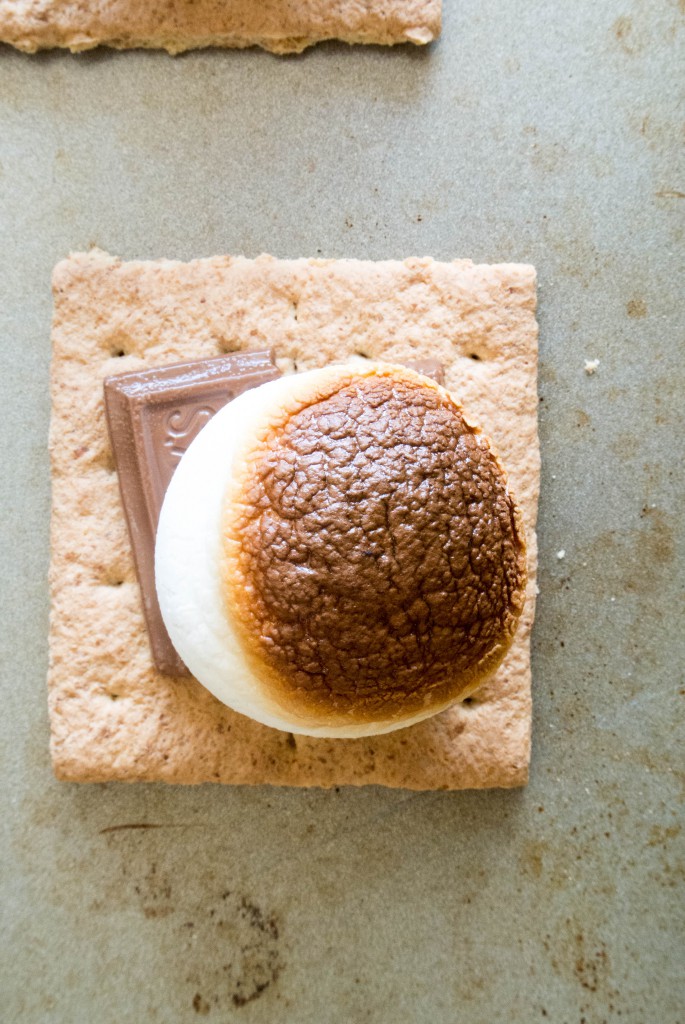 REALLY brief. Like, stare at them – do not walk away!

Top them off with additional squares, and VOILA. 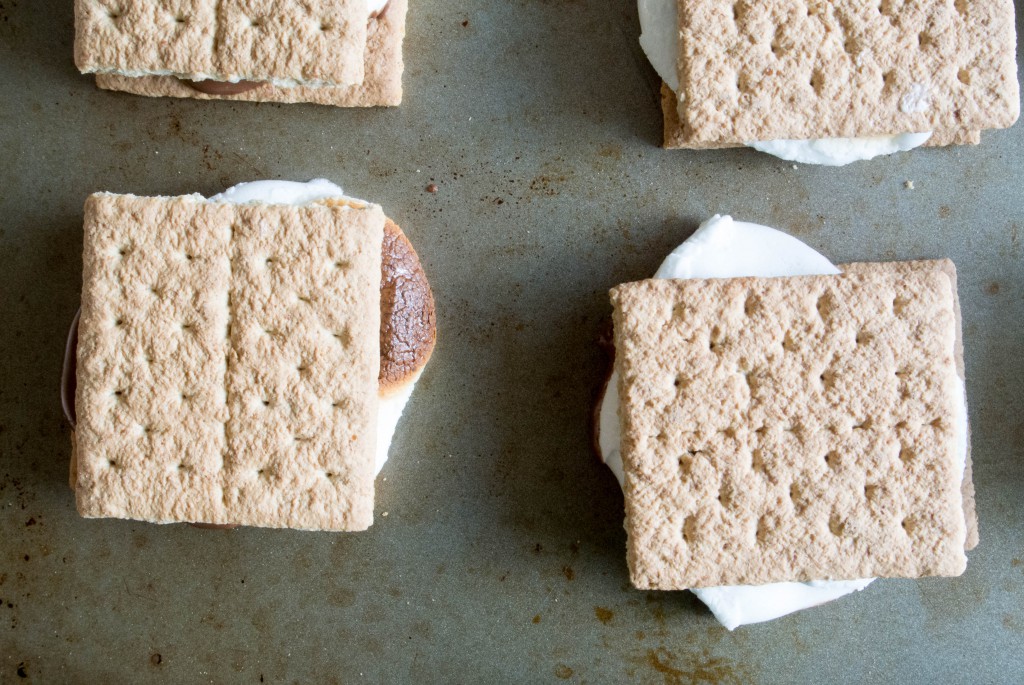 Let me know if you want prints of this one. It can be arranged. 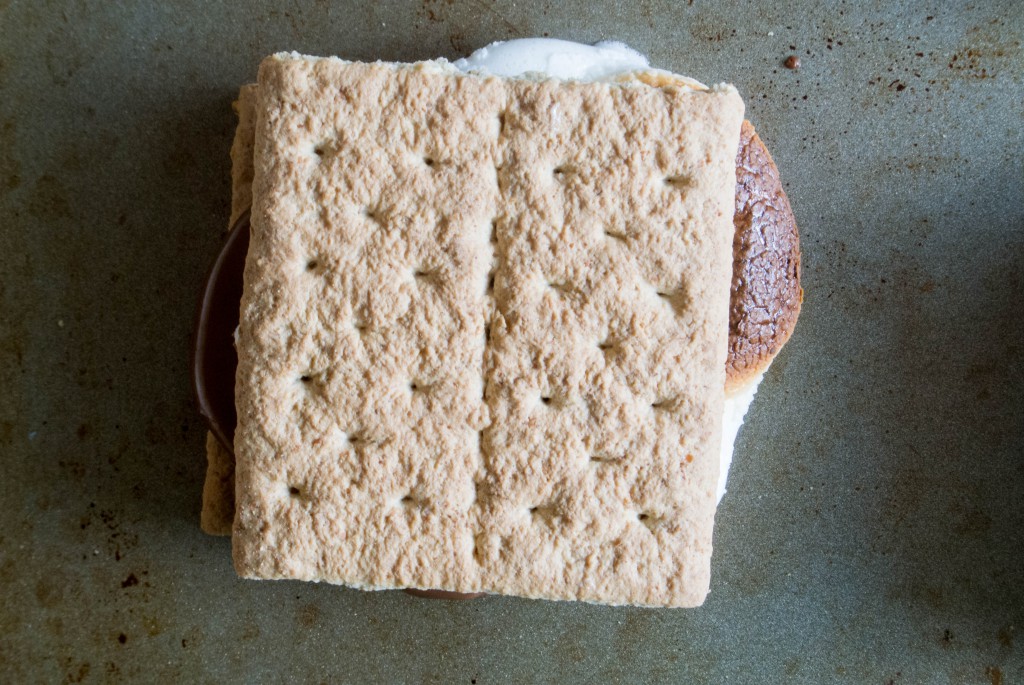 I was not kidding when I said that S’mores will last in airtight containers on your kitchen counter. Well, by that I mean, they won’t go bad. Whether they last kind of depends whether you are home staring at them or not. While nothing beats a fresh and hot S’More, I was surprised to learn that the marshmallows stayed soft and chewy for several days after the S’Mores are made. The melted chocolate solidifies where it melted around the marshmallow, but also stays pliable. So in a pinch, don’t be shy to make a batch a day in advance if you have an offsite S’Mores necessity and they need to be transported.

Indoor S'Mores for a Group

Print
Prep time
2 mins
Cook time
2 mins
Total time
4 mins
Who doesn't love a S'More?! Make a whole tray of this nostalgic treat in 5 minutes or less in your kitchen. Great for company, vacations, and staycations.
Author: myutensilcrock.com
Recipe type: Snacks, Dessert
Serves: 24 S'Mores
Ingredients
Instructions
3.4.3177
Thanks so much to my guinea pigs! You are truly selfless 😉

How have we gotten this far into the pandemic with

My first açaí bowl! You know how so many things

*And some cheese. Because he is SUCH a good boy. #

Tazewell capped off an all-star weekend with a sli

Actual video footage of me checking the back of th

(this is what happened to those shrimp) #🥘