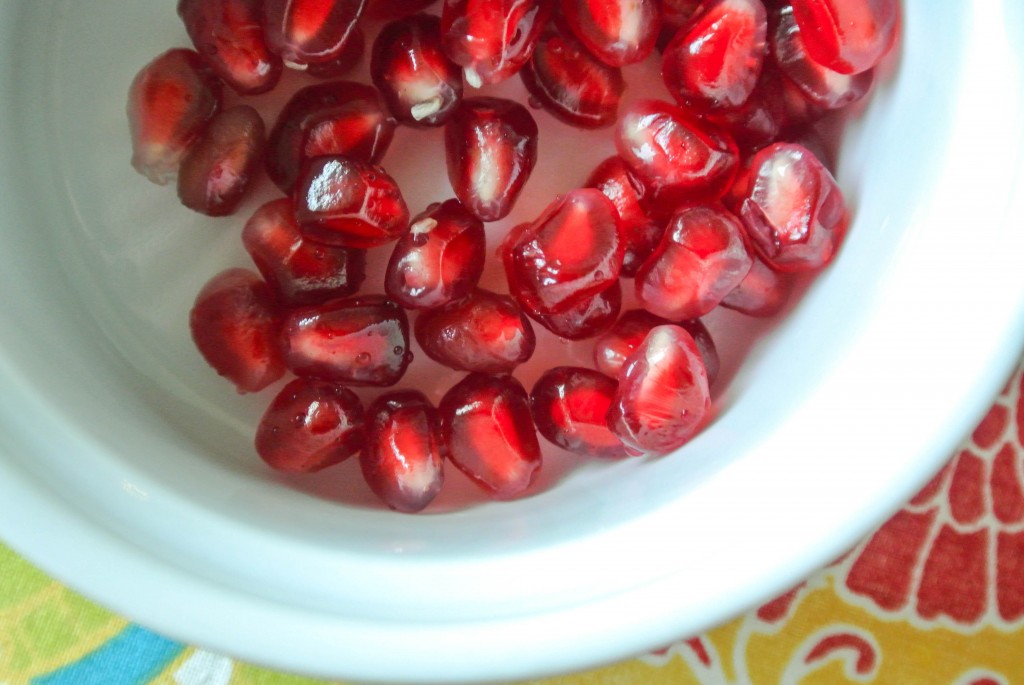 When I was younger, I was captivated by Greek mythology. Back in the day, I knew all the gods, goddesses, constellations, and tales of glory and despair. I learned that myths were invented and passed on, in part, to explain the unexplainable – and as cautionary tales. Life. Death. Creation. Thunder. Flying too close to the sun.

Some myths are very … specific, including the myth of Persephone. In short, Persephone was abducted by Hades, the god of the Underworld, who wanted her to be his wife. A year-long search ensued (although apparently there were several deities who knew where she was the whole time. PRO-TIP: check in with the GOD WHO SEES EVERYTHING THAT HAPPENS ON EARTH toward the BEGINNING of your search), and during that year, Persephone did not eat, out of sadness, despair, the whole lot. When Hermes showed up in the Underworld to reclaim her, apparently Hades let her go without a fight, but tricked her in to having just a small refreshing snack before she left – depending on the telling of the story, somewhere between one and six pomegranate seeds. BOOM! When you eat in the underworld, you have to STAY THERE! So Persephone had to return to the underworld for part of every year. BECAUSE SHE ATE LIKE THREE POMEGRANATE SEEDS. 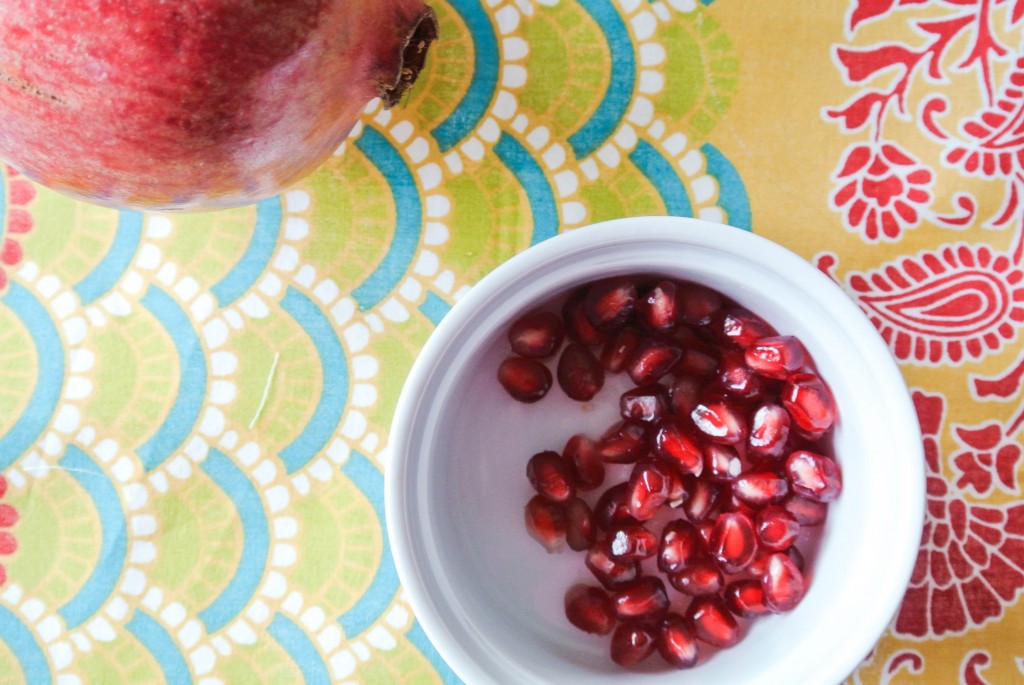 If you have not had pomegranate seeds, now is the time. Tempting enough to lure a gal to Hell for half the year, I promise that all you will find is a refreshing, healthy snack. Pomegranate seeds (already removed from the pomegranate) are increasingly widely available in grocery stores – but you pay for the convenience! Getting the seeds OUT of the pomegranate, which looks like a large apple with inverted openings around where an apple stem would be, may seem daunting. But it’s not! It’s actually quite easy once you know a few tricks. And, cheaper.

Start by grabbing a large bowl and filling it with water.  In the picture below, you see an 8-cup capacity bowl, filled with 6 cups of water. The water serves two purposes. It helps separate the seeds from the pulp; but more importantly, it catches the bright pink juice that would otherwise spurt out from the seeds when punctured. You want to be able to fully submerge the pomegranate in the water, with another inch or two of water over the top of the fruit.

After you have your bowl prepped, make a slit in the pomegranate, anywhere, about 1/4″ to 1/2″ deep and a few inches long. Submerge the pomegranate in water, and using two hands (your second hand will not be on a camera, most likely), pry it open. 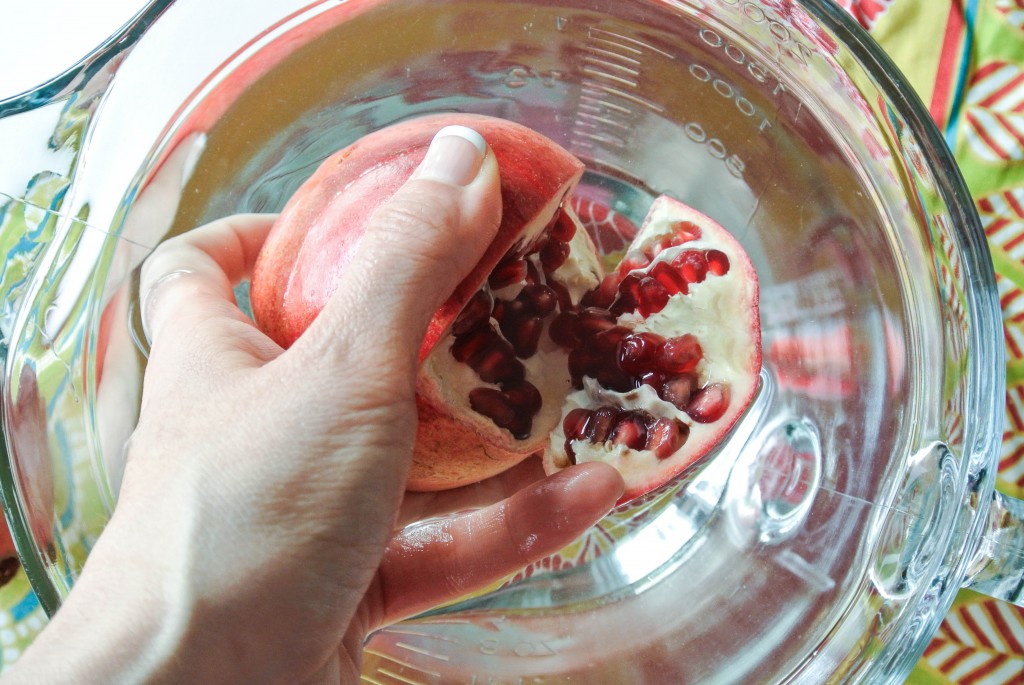 Break the pomegranate in to chunks, and section by section, rub the seeds gently with your fingers – they will fall out of the rind and into the bowl. Once you get the hang of it, turn the pomegranate so the skin is facing up and the seeds are down as pictured below – this will help keep any drops of juice in the water. (Note: perhaps you have heard of pomegranate juice? This is not the way to make it – it’s only a few drops but those drops can wreak havoc on a white t-shirt!) 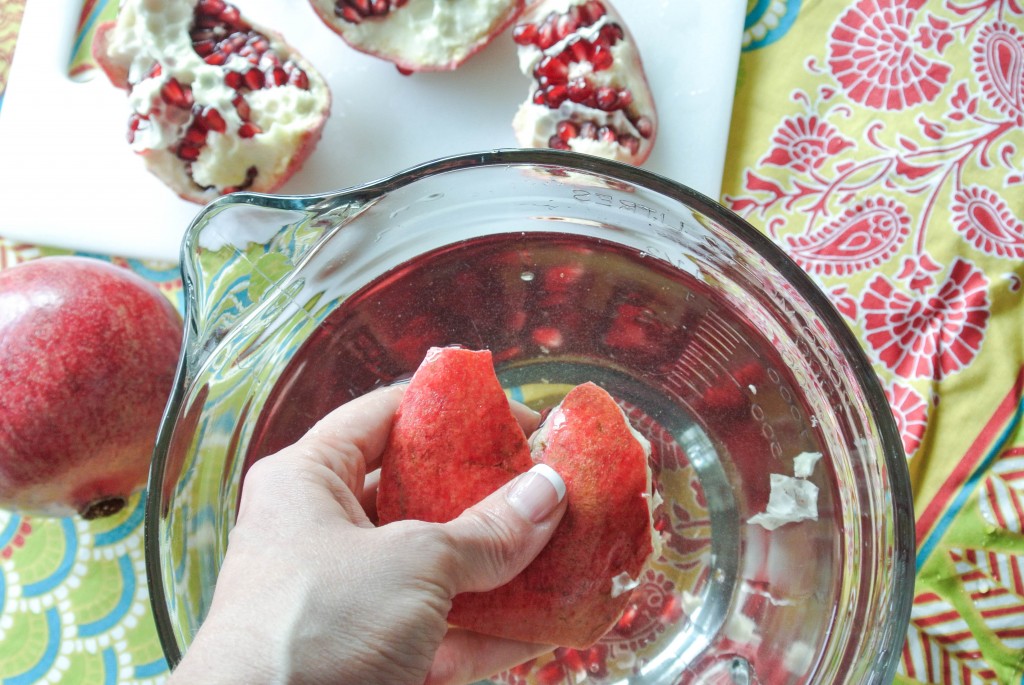 Repeat for all the sections of the pomegranate. One pomegranate should yield about 1/2 cup of seeds. Below is a picture of the seeds at the bottom of the bowl of water. Most of the rind will separate out easily, but you may have some hangers-on that you need to remove by hand. You can now pour the bowl of water into a strainer, pick out the pieces of rind, and give the seeds a rinse (and a taste!). 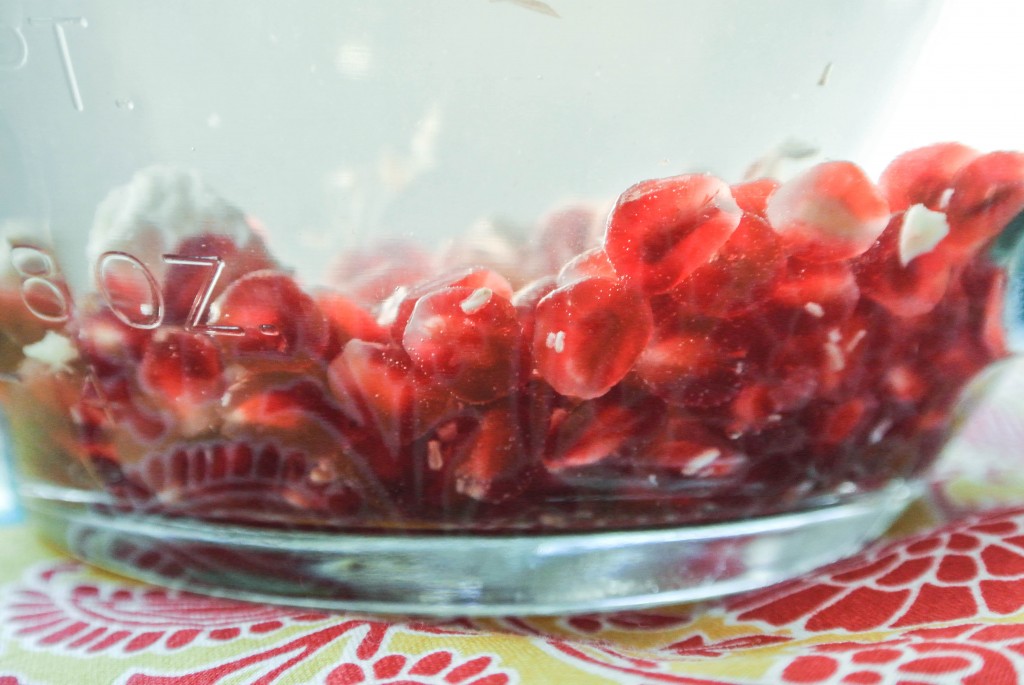 Pomegranate seeds will add great color to any dish. The best way to describe their texture is like a very small grape, with an edible crunchy seed in the middle. The taste is a bit more tart than a grape, but distinctive and delicious, and you should try it for yourself.

Once you taste one seed, you will have no idea how Persephone limited herself to 6. I eat these bad boys by the spoonful. 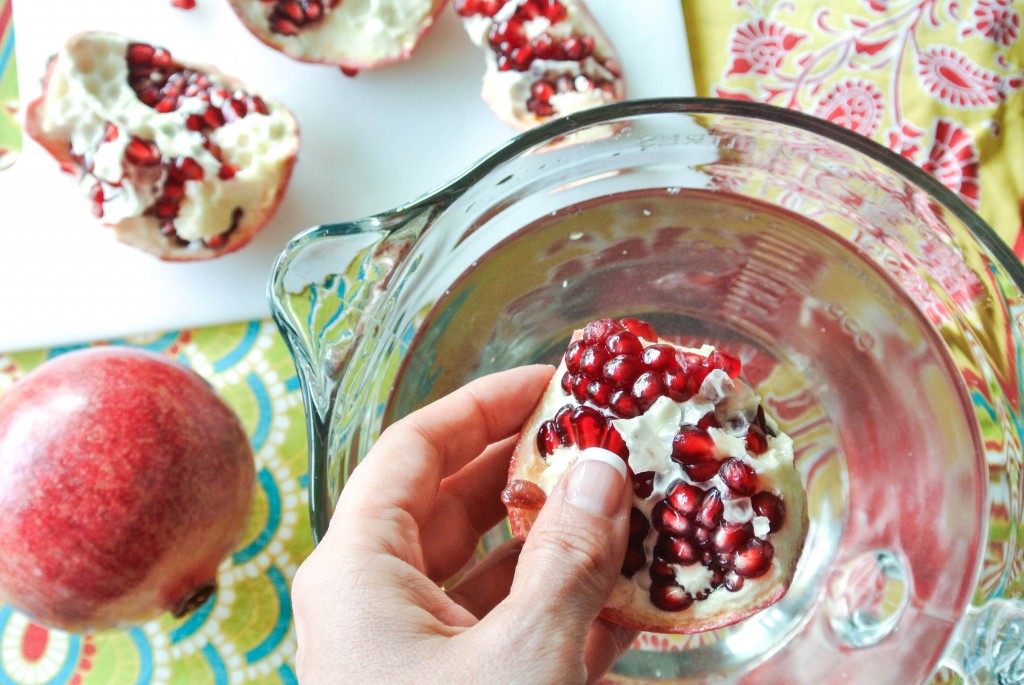 Speaking of eating, how about a few more suggestions than “shoveling into mouth with spoon.”

How do you eat pomegranate seeds? Leave your tips in the comments!

This was today. Semi-homemade. A @wholefoods jumbo

Tried to have a few decent homemade lunches this w